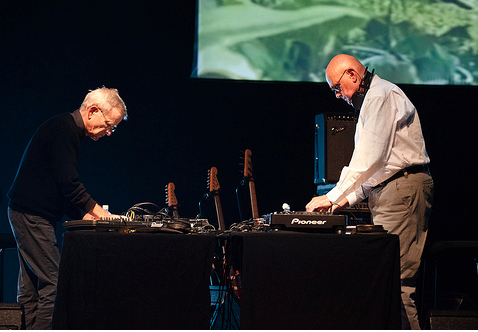 On The Village balcony, a girl is asking her mate: “So is this krautrock?” She may as well be asking: ‘Er, is this it?’ And fair enough, it’s hard to imagine the refined and reserved Cluster on stage tonight were once a cog in late-60s European counterculture.

Standing at their work station, a single table centre stage, 66-year-old Dieter Moebius and 75-year-old Hans-Joachim Roedelius (75!) are warming up with some minimal drones and throbbing sub bass. They’re precise, clinical and fairly static, but a bit of patience pays off.

It’s 40 years or so since Moebius and Roedelius joined the ranks of avant-garde, free jazz and psych-rock students in a post-war schism – evolving away from the blues-based music popular in Britain and America. Roedelius ran Berlin’s Zodiak Free Arts Lab, a quazi-mythical venue used as shorthand for the scene – a kosmische Cavern Club or CBGB’s, where you’d bump into Tangerine Dream, Ash Ra Tempel and Klaus Schulze invading the acid-soaked heads of the German youth.

Cluster (formerly Kluster) are one of the icons of the so-called krautrock movement – revered for their influence on space-rock and dance music, and for teaching a certain Brian Eno in the 1970s how to use those new-fangled electronic contraptions. From the industrial drones and tone poems on Cluster and Cluster II to the motorik proto-electro on Zuckerzeit, Cluster went on to record the pastoral ambient albums Sowiesoso and Cluster & Eno in 1977, just before their student coined the ‘ambient’ term for his own Ambient 1: Music For Airports.

The duo have stuck more or less to this abstract ambient path since, recording solo and sporadically collaborating together on albums. Last year’s Qua was only their fourth since 1979, and snatches of the record’s ambient soundscapes and fluttery synths fill The Village while the crowd remain eerily calm, swaying slightly. The miles of wires, valve amps and vintage organs may now be replaced by synths, CDJs and midi controllers, but the forward-thinking Cluster have never had much respect for the past anyway.

The pair seem to have settled into the ‘organic’ end of the ambient spectrum, without the new age trappings. So while The Village speakers are oozing bubble effects on Putoil, adding a touch of Animal Collective-style underwater trances, it’s counteracted by Xansero’s cold mechanical and metallic abstractions.

Like KLF’s Chill Out or an early Orb show, Cluster’s set comes in waves, dipping between delicate shimmery synth riffs and chimes, with woodblock effects and alien birdsong, before beats sneak up on you. One minute it’s a delicate synth swirl of Oxygene proportions, then a low-end bass rumble is punctuated by a mantra that sounds like Velcro between your ears. There are minute snatches of Detroit-style techno riffs, electro and even scratching you’d expect at a hip-hop show, but these are always reeled back in with industrial clangs.

They’re not exactly playing typical Saturday night ‘crowd-pleasers’ but it’s pleasing the crowd – although the biggest cheer comes from the messers in the house when Roedelius (who is huge, for the record) finally takes off his diamond golf jumper. In the duo’s austere terms it’s the equivalent of Hendrix setting his guitar on fire, an unscripted comedy moment that clears the air.

Given their status you’d imagine a Cluster gig would feel more grandiose – some exclusive  ‘happening’ in a fortress in Vienna or a Cologne art gallery curated by Wire magazine, but it’s a buzz to see The Village crowd drinking pints and cheering for the two elder statesmen. When Herr Moebius and Herr Roedelius simply take a bow and walk off stage after their performance, Radiohead’s Everything In Its Right Place comes on over the PA. It just about sums up the night.