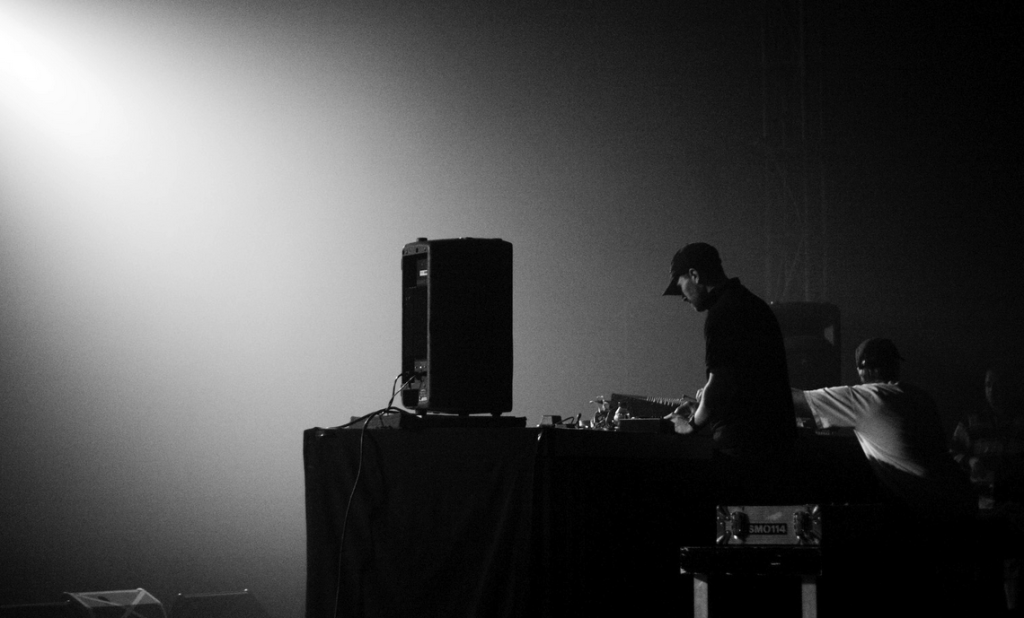 Autechre‘s no-frills live performance works on the thesis that stage shows and visuals are mere pollution, a distraction from their singular musical vision. Sean Booth and Rob Brown famously even play with the house lights turned off, to heighten the sensation between your eardrums – like trendy sensory-deprivation dark-dining restaurants. The “no-gimmick” rule has turned into a gimmick itself, fuelling Autechre’s reputation as the aloof pied pipers of so-called Intelligent Dance Music. The only visual clue that this is an Autechre show is the trademark ‘æ’ sticker on Sean Booth’s PowerBook on the Button Factory stage. Most of the lazy cliches are way off the mark though – Autechre’s live show is no semi-detached chin-stroker. Even if their 10th album Oversteps has been hailed as their most ‘accessible’ in years (it’s all relative remember), the Warp A-listers can still match labelmate Aphex Twin for sheer visceral aural carnage on stage, and the Dublin crowd are up for it tonight.

After DJ Rob Hall’s warm-up set of twisted acid, the brakes are put on the 4/4 and the house lights cut out. Without total darkness (the bar’s still open, facing the stage) the effect is lost somewhat, giving the Button Factory a dusky hue as Booth and Brown get to work on some off-kilter breakbeats, teasing away while a molten bassline snakes in. There’s no fanfare, no wave to the crowd, and for 90 minutes they don’t even look up – a caricature of ‘electro boffins’ that make Kraftwerk look like Scissor Sisters.

Booth said recently: “Touring is like its own project. It’s not like playback, we make new material to play out. It’s kind of a separate strand, it’s grown into its own thing.” Good job no one expected any ‘classics’ from Incunabula or indeed some uniform musical journey. The set changes pace often, jolting between skewed two-step and clanking hip-hop to stuttering metallic kicks that border on gabba techno. These tangents make or break an Autechre gig – the giddy kickdrum patterns and veering tempos require some concentration, not easy in beer goggles, and a few heads in the Button Factory have the look of rabbits caught in the headlights of an electronic juggernaut. One girl’s having no trouble dancing though, but even as she storms the stage to bust a move, the evening’s entertainers still manage to lock on target to their monitors, ever oblivious.

A few shimmery Amber-like ambient melodies surface occasionally, and they up the sci-fi ante with Drexciya-style techno mutations, but the night ends up in vein-melting white noise as the BPM accelerates and the whole thing crashes like a house of cards. It’ll go down as a full-on assault on the senses, shock and awe-techre (sorry).