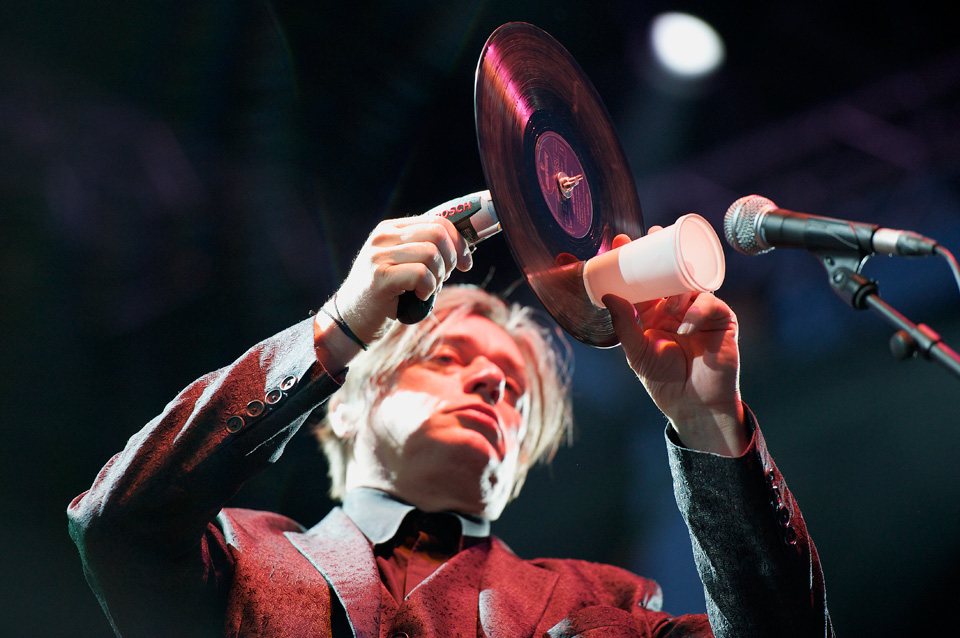 On paper, Einstürzende Neubauten really do have the least desirable slot of the whole weekend. A certain team in blue and maroon are doing a job on Manchester United in the Champions League final, and big screens showing the match are sucking huge pockets of Catalan and English fans away.

Not that it matters to the German industrialists – who after 30 years are far from hanging up their scrap metal instruments. Led by former Bad Seed Blixa Bargeld, the Berliners begin their set as sunset approaches – but it’s definitely pitch black by the time they finish. Beginning with the minimalist funeral march of The Garden, the set wades through swathes of white noise, dissonant synth pads, swampy basslines and Bargeld’s vocal contortions. It’s all mainly in German, with the odd military command in English. After the cacophonous start of Headcleaner, he orders, “SILENCE! For 4 minutes and 33 seconds…” but the reverential disciples in the front row? There’s no shutting them up.

Compared with the spindly heroin-chic figure in the early ’90s Bad Seeds, Bargeld has ‘filled out’, but it’s given him even more authority on stage, like an army officer full of whiskey. One mate says he looks like Shane MacGowan, but I reckon there’s a touch of the Mark E Smith about him these days. Maybe it’s his crumpled suit, the floppy side parting, the stealing of random ‘instruments’ from his band members. Or maybe it’s his general air of “this is MY band.” How did this giant ego ever play second fiddle to Nick Cave?

The other members are far from mere bit players though. On Haus der Luge, the bass player in a stinking white vest slaps his bass against amps like a redneck wrestler, while the rest are attacking synths, battering engines, oil drums, aluminium buckets, or anything else they can salvage.

Coming out for the encore, Blixa drawls, “We’d like to entertain you for half of the night,” while grabbing his crotch. “But we’re only allowed 10 minutes. We have to use it wisely.” It’s not exactly, “We love you Barcelona”. I’m not sure they even acknowledged they were here. They fire up Redukt, Blixa waves his arms like a demented conductor and we’re off again. Fair play too, they make that 10 minutes work, it feels like there’s solder bleeding out of my ears. Now let’s find out the score of the match.

Primavera had its fair share of gnarly veterans raging (and I mean raging) against the dying of the light. We already had John Lydon preaching, “Anger is an energy” from his PiL pulpit on Thursday, and the Ray Ban Stage has turned into some cauldron of noise on the last night, with Michael Gira’s gloriously resurrected Swans taking the baton after Neubauten’s set. ‘Collapsing New Buildings’ indeed.

Drawing heavily from last year’s album My Father Will Guide Me Up a Rope to the Sky (Swan’s first since 1996), Gira, his two drummers and wall of guitar sound batter the last few hours on the Ray Ban Stage into a heaving crater. It’s a thrill watching from the top of the stadium steps.

Gira spends much of the gig wailing, trying to swallow the microphone and sticking his fingers down his throat – a striking image in front of the giant Ray Ban ads that flank the stage, featuring a trendy twentysomething in a dainty striped top and a pair of shades. New song No Words/No Thoughts is the standout – a maelstrom of gongs, sludgy riffs and wrecking ball drums that sets up the rest of the gig.

Jim is a bluesy interlude but the darkness is never far away. “Spanish people rise up, overthrow your government,” Gira commands, as he halts proceedings. After the comradeship from Jarvis the previous night, who’d have thought Pulp and Swans would share a Common goal?