State has been giving Emeralds the runaround for the last few months. For starters, the Icelandic volcano farted ash clouds all over their planned Whelan’s show last May. We then missed them at Primavera a few days later as we waited in a three-hour queue for wristbands, and at Bestival they had the misfortune of clashing with Bjork playing her only festival set of the year. We finally get to welcome the much-hyped Cleveland instrumental trio in Whelan’s at their first ever Irish show, but soon realise blogosphere bluster doesn’t necessarily mean getting punters through the door, as Whelan’s is half-empty.

With over 40 releases since their 2005 inception, the drone/ambient/kosmische/noise act set themselves apart from the peers, with the sheer volume of CDRs, 7-inches and cassettes that reviewers in Wire probably can’t even get a hold of. Far from being another Bullshit Boring Drone Band (a title of a 2006 CDR), Emeralds have a hyperactive on-the-fly mentality that has them recalibrating their Korgs and Moogs with every release, constantly composing and improvising in live shows.

Their Whelan’s show treads the same water as last year’s five-star album Does It Look Like I’m Here, a backbone of arpeggiated synth patterns from Mark Elliot and Steve Hauschildt, worming around Mark McGuire’s guitar waves, delayed and shattered to the nth degree, as he tinkers with his jumble of effects pedals. Emeralds’ work rate means they’re always being propelled forward (it’s mostly unreleased material here), but the young trio share a bloodline with their forefathers.

Amid the floor-shaking bass in Whelan’s you can pick out the industrial drones and pulses of early Cluster or a less caustic Throbbing Gristle, the galactic sequenced rhythms of Stratosfear-era Tangerine Dream or the crackled guitar glitches of Christian Fennesz. Apart from the odd pitter-patter of broken snares halfway through, it’s mostly beatless, but Mark Elliot finds that internal beat somewhere, headbanging, shaking his synth rig, ripping dials and reminding us of the performance by keyboardist Noah Landis from metal gods Neurosis a few weeks back. 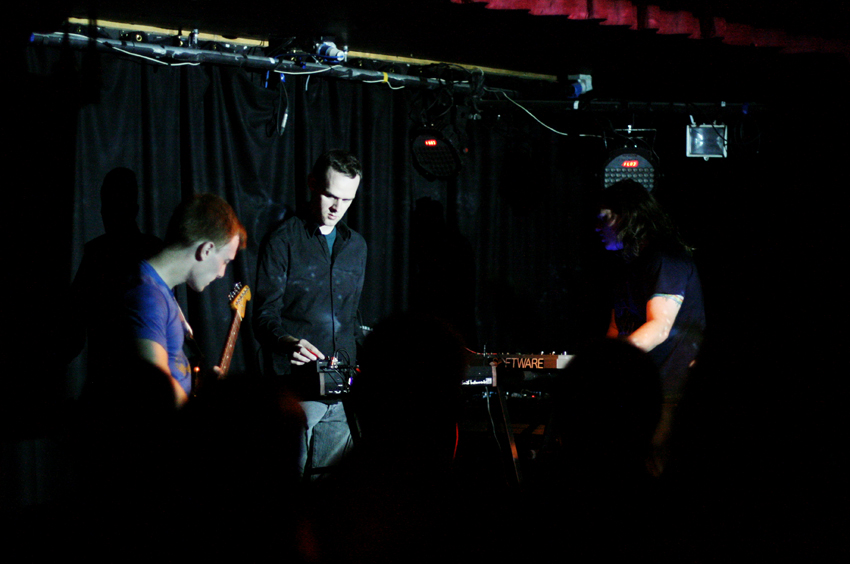 It’s all a bit static though. Footage of those early kosmische happenings in the ’70s is full of anarchic Berliners losing their shit to this type of spaced-out synth odyssey, but there’s barely a head nodding in Whelan’s. Maybe Emeralds work better at a festival if you’re panned out at the back of a tent having a moment on the grass, or even in a seated auditorium when you’re not distracted by punters chatting in the wings. I mustn’t have been the only Philistine who wanted them to play their ‘old stuff’ – the biggest cheer comes when they fire up the manic synth layers on Does It Look Like I’m Here, and their 50-minute set ends in a wall of noisy feedback and some satisfying itchy eardrums. So the show hit some, but not all, the right spots. A straw poll of mates has me in the minority though. Maybe next time Emeralds. We can work at this. It’s not you, it’s me.