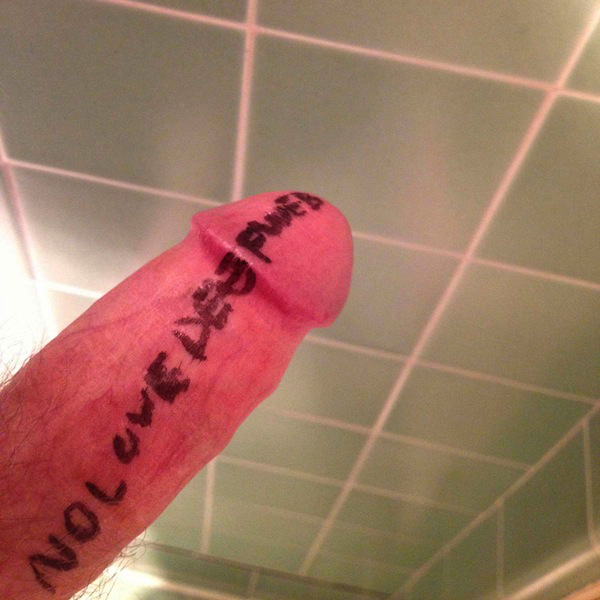 Just as the big dick on the cover can’t be unseen, you won’t be forgetting No Love Deep Web in a hurry.

Death Grips’ third album staples itself to your inner ear, a hip-hop headbutt that gives you the fear and a simultaneous nihilistic rush as soon as MC Ride bellows: “Shit’s about to get kamikaze” on opener Come Up and Get Me.

The Sacramento trio’s second album this year is essentially a piece of band-sanctioned contraband, a self-leaked shit on the doorstep of their label Epic. The major took a big gamble signing the volatile act for The Money Store album earlier this year, but that hand grenade has just blown up in Epic’s face before it could milk any hardcore street cred. Earlier this month, Death Grips leaked the full album on their website, cock and all, with the tweet: “The label wouldn’t confirm a release date till next year some time… the label will be hearing the album for the first time with you.”

What Epic is hearing, along with the rest of us web vultures, is a further extreme deviation from major label hip-hop – a furnace that’s been stoked since Death Grips’ rabid mixtape Exmilitary in 2011. They’ve evolved somewhat from the slabs of white noise, but the industrial shards on No Love Deep Web slice through with military precision. MC Ride’s vicious streams need a hefty foundation, and production team Zach Hill and Andy Morin bolt together flatlining bass hums, clattering sheet metal percussion and rave synths spiked with all the bad drugs. On Hunger Games, they revisit the empty warehouse dub heard on parts of The Money Store, while World of Dogs is as intricate as Antipop Consortium, or Autechre scuffed up with a rusty Brillo pad.

Aside from the battered hardware on the album, the raw material of MC Ride’s voice is further twisted and multi-tracked into squalid production corners, gnawing away at your nerve endings with abstract threats, political put-downs and straight-up derangement. On No Love his echoed squeals sound like he’s hurling himself head-first against the walls of a jail cell. “I’ve got some shit to say, just for the fuck of it,” he barks on Lock Your Doors, and there’s no trace of introspection anywhere: “Fuck Atlas – my ego palms planets.” The Hunger Games’ line, “you wanna lift? You can get between the back seat and my dick” could be an Ol’ Dirty Bastard goofball classic, but it’s pure venom here, along with every other line on the album.

Who knows whether Epic is about to drop Death Grips as a bad debt. Maybe we’ll never get to see No Love Deep Web in CD racks or the whole 12 inches splayed over a slab of vinyl. But their work is done here for now at least. Home taping isn’t killing this music – Death Grips are fuckin killing it, full stop.