THE last time Shabazz Palaces played Ireland they had to come on in the sunshine to 50-odd rollover Sunday heads in a free-for-all conga to Paul Simon’s You Can Call Me Al during the stage turnaround.

Shabazz Palaces frontman Palaceer Lazaro aka rapper/producer Ishmael Butler laughs down the phone as he recalls the early evening silliness, saying: “That was crazy man, but I liked it… we’ve played Ireland a couple of times and we’ve no trouble trying to get people to party.”

We’re chatting to Butler at the ungodly hour of 10am Seattle time just after the US leg of the duo’s club tour for their second album Lese Majesty. He’s recharging at home before the European stint that hits Dublin’s Twisted Pepper tomorrow.

Summer’s long gone at this stage but the Seattle duo will be hoping to summon some of that residual spirit when they come on stage armed with a bunch of new songs, with Butler telling us it’s all about the “energy, spontaneity, the dynamics of the crowd”.

A few months after its release, Lese Majesty has sunk in by now, and it may well be the hip-hop album of the year, and a top 10 album full-stop. It’s a cerebral, intricate map spun out across across seven individual suites with loose sci-fi and Egyptology themes and oblique hip-hop tropes. It suggests Butler and his producer partner Tendai ‘Baba’ Maraire are as much in thrall to Bitches Brew-era Miles Davis and Sun Ra than surreal rap outliers like Kool Keith. It’s a parallel universe away from Butler’s time in 90s Grammy-winning socially conscious rap trio Digable Planets.

With their dense and meticulous productions and added live percussion and mbira African thumb piano by Maraire, we wonder if it’s a challenge to recreate such a singular sound live. Butler explains: “Live isn’t a replication of the album. It should be something that takes things off in different paths. The records are based on spontaneous moments, we try to keep that line going through the live shows rather than duplicate. It’s the same as in the studio, things happen in our heads, we riff on things, they reach out to us and we just go with them.”

“It’s happening so fast, we gotta capture it and get followed up by the currents themselves” 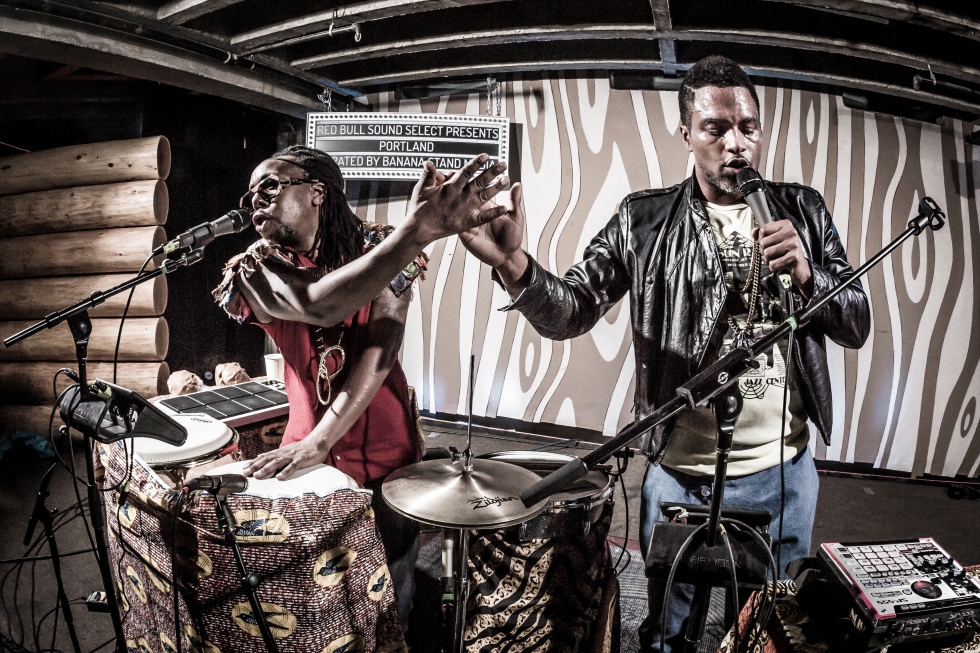 Instinct is a theme that’s been running through Shabazz Palaces since their self-titled EP and its follow-up Of Light in 2009, and 2011’s debut album Black Up. The ‘Future of hip-hop’ tag is thrown around annually, but it’s sticking with the Seattle duo. Not as wilfully abstract as cLOUDDEAD, as verbose as Antipop Consortium or as corrosive as Death Grips, Butler says they’ve arrived at this point by trusting their guts, as cyphers.

He says they don’t agonise over their glittery freewheeling electronics, but condedes:  “Sometimes it takes a while to find some  sound you heard in your head and get it out, mostly because when you’re trying to get it out, you come across a whole bunch of other stuff you like too.”

“We’re always making music. On the road, at home, every night something new is gonna happen. There’s no chance of disappearing. No man, no time soon”

Butler says of writing Lese Majesty: “I was thinking about new approaches to recording, and putting ourselves in different situations. I got a lot from looking at visual art, paintings, sculpture. Not even really studying how it happened, but just trying to come up with my interpretation of the process that produced that art and put myself in situations like that. I don’t really think of it cerebrally while it’s happening. It’s happening so fast, we gotta capture it and get followed up by the currents themselves.”

Butler admits being a “pop culture fan by default”, but another recurring theme on Lese Majesty is vacuous consumerism and “me-mania”, touched on in tracks #CAKE and They Come In Gold. Even with rap’s tradition of grandstanding, he recoils from “obsessive behaviour that moulds individuality in an obsessive way, like taking a lot of selfies or critiquing your own artistic piece on a blog”.

He adds: “This corny shit that is a new development, a new tool for megalomaniacal people to exercise their whims. It seems to take away from living, by condensing everything to this constant acknowledgement of yourself.”

Shabazz Palaces raised a few eyebrows when they were the first hip-hop act signed on the iconic alt-rock label Sup Pop for Black Up in 2011, but since then Butler has been snapped up as an A&R for the label forever linked with Nirvana, Mudhoney, Soundgarden and beyond, the label that turned Seattle into shorthand for grunge and skuzzy rock. In the wake of signing Butler, Sub Pop has since signed alternative hip-hop acts Clipping and THEESatisfaction. He says the main trait he’s after is “Just passion really, and whether there’s enough imagination behind that passion”.

If you visit Seattle’s Experience Music Project Museum (EMP) you’ll find display cases showing of Kurt’s ratty green jumper from the Smells Like Teen Spirit video, Jimi Hendrix’s battered guitars and scrawled C90 demos from all the grunge usual suspects, but Butler says it’s easy to scratch the surface and find a mine of talent in Seattle.

He sighs, saying: “The thing about that is if I could name 10 rappers I could name 50, and they would equally be as significant and important as the ones I just said, it’s hard to do… I could go on for days. OK, there’s a guy Porter Ray, he signed with Sub Pop recently, and a guy named  Royce the Choice on DJ Mustard’s label, Nacho Picasso, Moor Gang with Jarve Dee, Gifted Gab, Cam the Mac, Chimerenga Renaissance… that’s just the new crop of cats and there’s still hundreds of them left over… there’s a lot of people, bro.

“I think a lot of those rock bands, although they are Seattle-based, they have an international significance, so they’re the ones that get the exhibitions and stuff like that, but locally the Seattle hip-hop scene is so vast and rich that it could have its own exhibition too, just not on an international level. But locally it’s pretty vast and diverse.”

And what about Shabazz Palace’s place in Seattle hip-hop and beyond — after self-exile from music for over a decade between Digable Planets and Shabazz Palaces, is Butler in long-haul mode for now? “Oh yeah, for sure… we’re always making music. On the road, at home, every night something new is gonna happen. There’s no chance of disappearing. No man, no time soon.”