Techno was more ‘other’ than Kraftwerk’s prophetic synth symphonies, the emerging electro-pop and the house music that was still aligned with disco. Techno was visceral and wordless, and stood accused of stripping the humanity from Kraftwerk’s man-machine manifesto.

In 1989 Jeff Mills lit the fuse on Detroit techno’s guerilla wing Underground Resistance along with Mike Banks and Robert Hood, before blazing a trail as one of electronic music’s true visionaries and conceptualists. Some 30 years on from creating his ‘Wizard’ DJ alter-ego and forging militant, year-zero minimal techno, Mills has become artist in residence in the Louvre in Paris. There’s no feeling that he’s subverting the establishment from within, as he says electronic music needs no validation.

Taking time out from touring to discuss the projects with me, Mills is unequivocal, saying: “Electronic music is and has been bigger than most of us really realised. From what I can see and in terms of influence, it surpassed all other music genres a while ago.”

Also, At the time of interview, the Museum of Modern Electronic Music had been announced for a 2017 opening in Frankfurt, and Mills adds: “I’m not really surprised by it, we’ll see more of these kinds of things happening in the near future. Only a few people, such as DJs, the ones that have had the opportunity to constantly travel the planet to see it in action really understand the magnitude and how impactful it has become over the decades. A museum is an institution that the society preserves as a cultural depository of things we deem as important to the evolution of our world. From my point of view, it makes perfectly good sense.”

Mills is resident artist at the Louvre from February-June and exhibitions include a duet with classical pianist Mikhail Rudy, a self-directed film tribute to ancient Egypt through contemporary dance and a rewrite of a film about space exploration with science-fiction writer David Calvo.

“My current work at theLouvre is what past works have progressed to, but I still have many more ideas and ways about how the distance between art forms can be decreased or fused and interlaced to an unconditional point,” he says. “It’s fantastic to have this opportunity to create in such an open atmosphere at the most prestigious museum in the world. I think it says a lot about ideas and impressions are changing about electronic music and how it should sit in society.”

Mills says a “turning point” was his re-scoring of Fritz Lang’s seminal 1927 science fiction film Metropolis at the Pompidou Centre in Paris in 2000, and since then he has been constantly closing the gap between electronic music, visual art and classical music. Mills’ work has increasingly been informed by science fiction and futurist projections. Since 2000 he has performed live scores for many science fiction films including Woman in the Moon and Fantastic Voyage, saying: “I really enjoy working on these type of projects, the re imagining the scenario of an audience seeing something graphically for the first time. I’m generally open to work on just about anything that would allow electronic music an opportunity to extend itself.”

As well as silent movies and installations, Mills has collaborated with numerous orchestras, notably the BBC Symphony Orchestra and the Montpelier Philharmonic on the album Blue Potential.

He says these endeavours have helped do away with artistic barriers, adding: “There are different methods used on how subjects should be addressed, but I’ve come to realise that all music genres and all other art forms are practically pointed in the same direction. At times, it may seem as if these styles of expression are worlds apart, but in reality, they all are vying to grab people’s attention so that a message or subject can be noticed and recognised.”

Some sniff at the umbrella term ‘dance music’, but even a conceptualist like Mills won’t be drawn into an aloof stance, saying: “We’ve been lucky to have such a blanket term. I think it covers such a large number of styles, sounds and methods that it’s become apparent that to frame things off doesn’t make much sense anymore. This releases us from the idea and notions of what we’re supposed to do, how things are supposed to be. To not be specific in terms, definitions and descriptions has allowed many to move onto to more important levels of our artistry.”

“If DJs didn’t know what we were doing, how did we get this far – by chance?”

In June at the Louvre, Mills is also joining two live musicians on stage for the premiere of The Exhibitionist 2 – the sequel to his visionary observational film and DJ mix project from 2006. With The Exhibitionist, Mills aimed to reveal “exactly what a DJ does – how music is programmed and played for the purpose of dancing”, with multiple shots and close-ups of the artist at work. Mills on occasion also DJs kneeling down with his equipment spread out on the floor, a mass of wires, drum machines, decks and pedals.

He says it doesn’t come from a wariness that DJs aren’t doing much in the box behind a Perspex window, but a genuine show and tell exhibition.

“From what I’ve always known of DJs and the culture, we’re not obligated to prove anything other than the fact we play and program music for others enjoy,” he says. “The degree of what a DJ does is measured by what? If DJs didn’t know what we were doing, how did we get this far – by chance? I often do away with the DJ stand and play on the floor because it’s a more personal and intimate experience. Early in my career, I didn’t have the space for large pieces of furniture, so I would put all the equipment on the floor of the room and in positions that were more for convenience than for others’ impressions.”

Mills tells us he has “only been asked to present a DJ set” in Dublin on Sunday, as if there’s such a thing as ‘only’ a Jeff Mills DJ set. Aside from his concept albums like the Sleeper Wakes  series with their vivid back stories and unfolding musical suites, Mills’ three-hour sets are relentless rapid-fire shuffles of minimal techno, chimey sci-fi interludes and classics from the Detroit vaults, with his calling card The Bells still dropping regularly.

Expect plenty of one-offs, as he reveals: “I’m looking for any opportunity to test out new material. In addition to new tracks for the Exhibitionist 2, I’m currently producing for two upcoming albums – one is Free Fall in the Sleeper Wakes series and the other is Galaxy, with both out this year.”

For many, electronic music is driven by technological advances, but Mills maintains that aside from moving on from vinyl a few years ago, his evolutionary path in the field is psychological. He still uses analogue sequencers and samplers, and adds: “I’m distancing myself more from technology and putting more attention to concepts and substantive subjects. I’m reading more than I produce music so my creative actions are based off my psychological reactions – not on how clever I can make things sound, but using music to translate certain feelings.”

For Mills’ film and performance of Life to Death and Back at the Louvre, Mills considers the circadian cycle of the Sun, the cycle of drought and flooding of the Nile and the cycle of human birth and death.

“I guess somewhere in my life, I must have seen or experienced something that convinced me that positive things can result from repeating themselves over and over again” 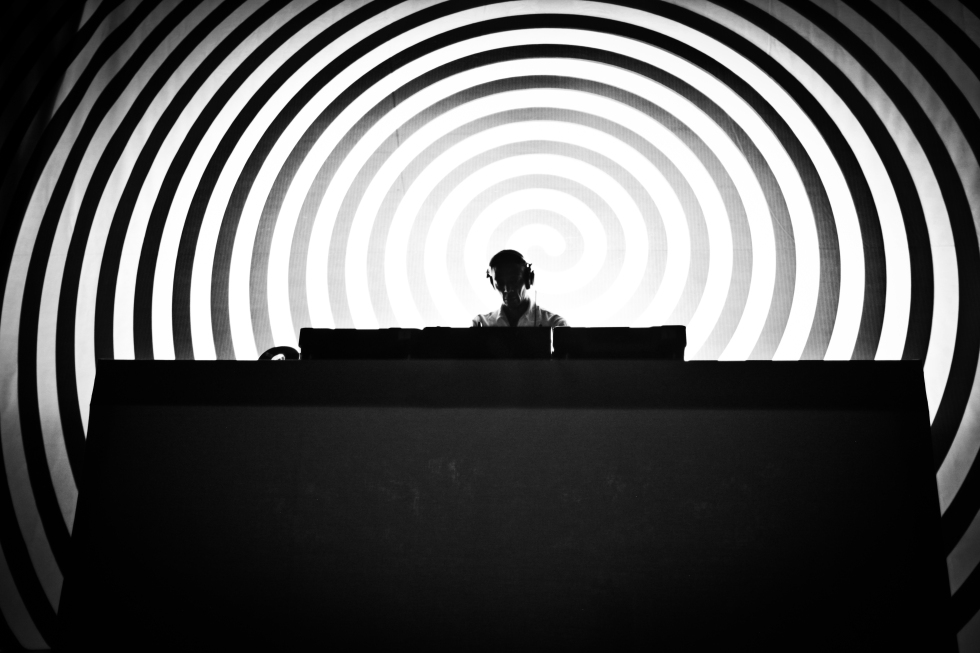 It revisits perhaps his most recurring conceptual theme – that of cycles, circular motion and perpetual repetition, from seminal works like Rings of Saturn and Cycle 30, to his Centrifugal Force installation and sci-fi planetary orbits.

I wonder if the act of spinning records may be an extension of this fascination?

“I can’t say. It’s just always been a figure and motion that I’ve always been attracted to. I guess somewhere in my life, I must have seen or experienced something that convinced me that positive things can result from repeating themselves over and over again – the modification of time or a certain consistency, but at the same time, with substantial progression.”

Jeff Mills’ abstractions and high concepts may seem parallel worlds away from his early years in confrontational and revolutionary collectives, but he maintains that he’s “always tried to use Music to say something relevant or useful”. He says: “Then it was about breaking free and acting independently. Now, its more about what to do with the freedom that we’ve worked so hard to achieve.”