Todd Terry is one of only a handful of producers who could call a track Real House and get away with it. His 2014 release budges up next to all those classic records about house music itself – and he’s got plenty of those in the attic.

After nearly 30 years as shorthand for the New York sound forged in the Paradise Garage, Terry is still house music royalty – with his ‘Todd the God’ handle still doing the rounds.

When pushed for a definition of ‘real house’, Terry defers to a nebulous definition that’s sealed in his 1991 Sax classic House Is a Feeling – and calls out the ‘feeling’ of the music often during our half-hour chat.  Speaking from New York on some rare down time between European festivals and his regular Ibiza shows, Terry says: “Some people get the real sound or essence of it. I always try to keep that feeling out there… when I’m in the studio, I wanna feel as though I can relate to what the crowd relates to, I wanna put myself in that zone.”

Terry admits that in the last decade for about “five or six years” he felt a bit out of the zone, when he reckoned “house wasn’t in a good place”, up against minimal techno, so-called ‘electro-house’ and later the EDM wave that nicked the house name and ran with it without looking back.

“I always say it’s a bad move to name something house if it’s not house,” he says. “It kinda destroyed us for a while in a big way – we had to pull back from it. It was really difficult to play some of these EDM-type festivals. I mean, you gotta play house music, cos that’s what you do. It’s just like they didn’t know what the hell was going on, so it was like schooling everybody all over again.”

While the drop-after-drop maximalism of EDM is devouring everything at the minute, Terry reckons ‘real house’ is also making a resurgence as people break off in splinter groups: “I think people get tired of the fist-pumping stuff… and with [bleepy minimal techno] It was a weird mood for festivals to begin with. House makes people dance and enjoy themselves a little bit more than just waiting for some tiny drum roll all the time, or a little break. House music is always gonna have a better feel… it’s great to get back to a good house vibe. Amsterdam, Ibiza, all the summer shows have been kicking ass.”

There’s never any hard feelings with Terry though – he’s never been a blinkered purist, and Real House was even released on Swedish House Mafia man Steve Angello’s X label. He says: “What those guys do, I don’t knock anybody’s music, it’s not my style.”

The ‘no boundaries’ in music thing can be turned into a cliche or a H&M t-shirt hashtag, but Terry can stand by it. For 20-odd years he’s been flitting between his own deep house productions, dark ragga and drum & bass on his album Resolutions, and hip-hop, pop and rock remixes. He’s added the Todd Terry stamp to over 1,000 remixes, with Bjork, Garbage, The Rolling Stones, Kylie Minogue, Duran Duran and Michael Jackson among his credits. And his remix of Everything But the Girl’s Missing is definitely the version you know. More recently he’s turned former teen Disney princess Demi Lovato’s Cool For the Summer into a blissed-out 4am Ibiza terrace track.

He says he’s not too precious about boxing off different artists, adding: “I always think that sometimes you can put a cool sound on the poppiest of artists. I’m always gonna take on the challenge. They give me their song and I’ll give them a funky dub that all my guys can play – it’s the best of both worlds, there’s always room for that. I’ve remixed Usher, I’d do whatever, I’d do Rihanna, Madonna, there’s always room for that, there’s room for Lana del Rey and me, room for whatever and me, I’m gonna go for it. I was even making dubstep, just for myself… if I hear something inspiring I’ll try to make something similar. I wouldn’t play it out of course but it keeps you going… there are no boundaries man.” 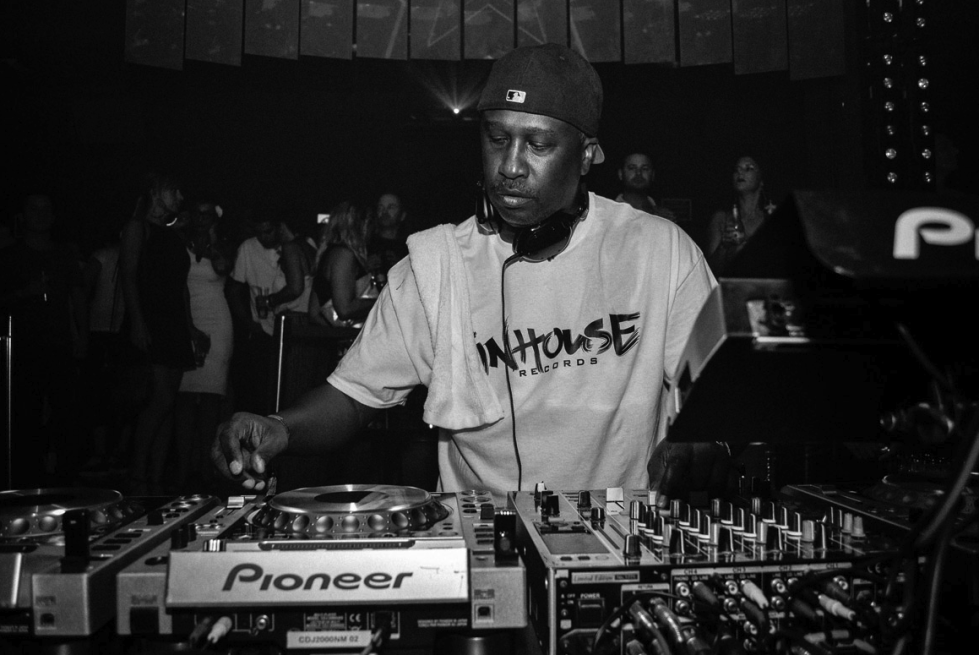 This catch-all magpie attitude is a rollover from earning his DJ stripes in Brooklyn during the sampling gold rush in the mid-80s, when “hip-hop was really enormous for the kids. All our parties were a hip-hop or rap trip, stuff like Sugarhill Gang, Grandmaster Flash, stuff like that. That was our club music”. He reckons hip-hop’s explosion was sparked in part by the competition between rappers, saying: “That’s what hip-hop was brought up on. who could be the best MC… my crew is better than your crew…  everybody wants to be heard, whether they’re good at something or bad at something they just wanna be heard, they just wanna pop shit.”

When pushed for current hip-hop artists on his playlist he name-drops Dr Dre’s new album Compton, along with Drake and Meek Mills – who’ve been stuck in a war of words on Twitter over the last month. He reckons the pair are just carrying on this rap battle tradition, adding: “I think it’s great if it just stays out of the hood. As long as the hood doesn’t get involved and no one gets hurt, fine. That’s what hip-hop was brought up on. That’s where I come from so I appreciate it. I’m not bad with that. I’d rather it all being online than someone kill somebody over some stupid shit.”

Back in the day, being knee-deep in rap and hip-hop meant Terry had a head start on many other kids chancing their arm on the new house sound. He was already a hip-hop DJ, and knew his way round a sampler and cutting drum breaks for MCs. While many artists of the era recall an epiphany in a club, the young Todd was more curious than blown away: “The first time I heard house music, a friend of mine brought it to me on cassette. I didn’t really know what was going on, maybe it was a different style of disco or club music? Mainly because we would play all types of music when we used to DJ. I was used to music with a lot more changes, it seemed a lot more simplified, then I started learning.”

Terry’s first taste of house music was North Moore, “a kinda beat-up club in Manhattan but with a really good soundsystem. They’d play a mixture, DJ Raoul played all types of music. Broadway 96 was another one that played a real mixture. Then a month or two later I went to the Garage and even then it wasn’t just house music. Larry [Levan] used to play all different styles,electronic, funk soul…  he travelled with you. I was already DJing a little bit so I was figuring out what was going on, learning while I was listening. Me and a couple of friends, we got it right away, we took something away from it for our sets, feeling it out.”

“I always thought I could add more to it,” he says. “I always wanted things to have more action, do something every eight bars, every 16 bars, not just be really minimal the whole way through.”

Terry initially recorded as Masters At Work – before passing on the name to ‘Little’ Louie Vega and Kenny ‘Dope’ Gonzalez – and the Masters At Work track Alright Alright was his pass to move from hip-hop clubs to house nights. He says “remixes started pouring in”, and tangential cut-up tracks like Bango (To the Batmobile), Swan Lake and Yeah Buddy stuck two fingers up at those bitching about house music’s repetition.

He was making a name DJing around New York, but didn’t really become ‘Todd the God’ until he caught acid house wave in the UK – around the time underground US house and techno DJs were being flown over for victory laps in London and Manchester. “When I got invited to England, I thought something is going on with this music,” he says. “Hearing dance music in general go mainstream, that was very interesting. Something that sounded like a house record on the radio, or hearing Rhythm Is a Dancer, taking some of the underground sounds and putting it in pop. Y’know some house records shouldn’t be on radio, they lose a bit if it’s too popular – but back then sometimes records just needed to be heard.”

And even as a  New York house legend, the Hacienda in Manchester seems to have a bigger hold on his memory: “It had its own type of Garage feel… it just put you in the mood to enjoy yourself. You could be the grumpiest person but you could enjoy yourself. Like in Ireland, it reminds me of the Hacienda all the time, Ireland’s always a good crowd, you come there to party, you don’t hold anything back.”

There won’t be much holding back on Saturday at Electric Picnic when Todd Terry takes over the Red Bull Academy stage for a house masterclass. He’s long overdue an Irish show and says he’ll deliver – as if we need any reassurance.

As always for a festival crowd he’ll be armed with a bag full of classics from the vaults, and assures us: “I’ll play all the hits, and some new shit, I always mix it up. But you’ll have a bunch of kids there too, I can’t just play for an old crowd – the kids will be around longer than us!

“I’ll cater to everybody, I’m not all of a sudden gonna start playing a bunch of warp bass lines through my whole, set, I’ll be mixing it up, and whether you like it or not, I’ll be playing house, giving it to you all.”