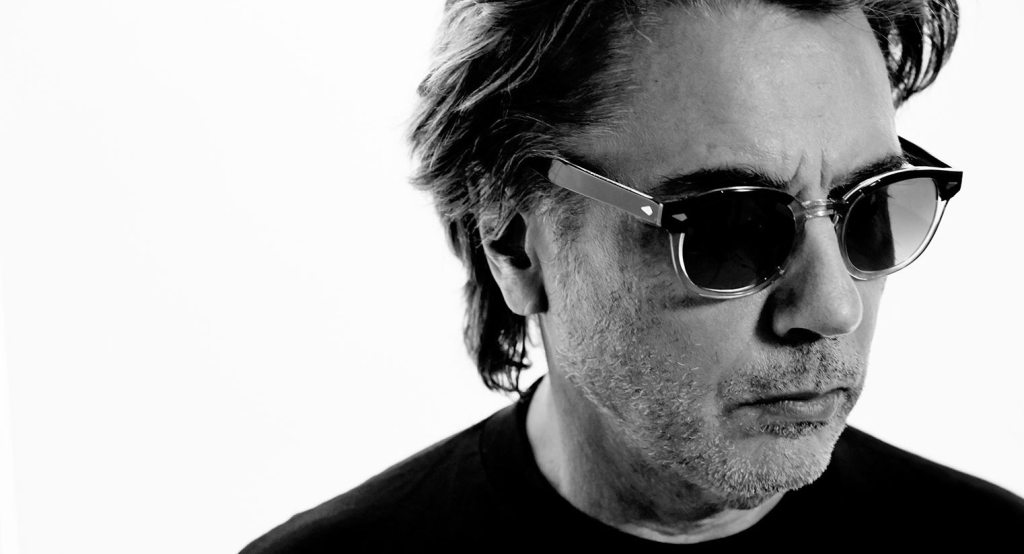 Electronic music was always supposed to be about looking to the future, but French pioneer Jean Michel Jarre worries that we’re getting blinded by misty-eyed nostalgia.

Chatting about his new album Electronica, Jarre concedes that he carries 40 years of baggage — he’s a founding father of synth music, and he’s also pop culture shorthand for electronic maximalism. His 19th studio album is an attempt to reconcile his fanatical futurism with a need to mark electronic music’s heritage.

“Generation after generation you have this rather reactionary attitude that yesterday was better and tomorrow will be worse,” he says. “I think we have to rebuild the future. The beauty of electronic music is that it has a family and it has a heritage and also a future.”

Jarre says Electronica is his “most ambitious” album yet — serious words from a man who regularly breaks his own world records for concert numbers (3.5 million in Moscow still stands), and turns whole cities into blank canvases for laser and light shows. The five-note motif in Oxygene IV is one of the most recognisable melodies in recorded music, and there’s a minor planet named ‘Jarre 4422’ somewhere in the galaxy. The man thinks big.

He says after a four-year gestation period for the album he’s in a “schizophrenic mood”. He’s just released Electronica 1: the Time Machine. He’s still mixing part 2, “so it’s not quite a relief yet, but it’s finally great to talk about it”.

He needed a part 2 because he sent collaboration requests to 30 artists and every single one said yes. That’s what happens when you’re Jean Michel.

“I ended up with two hours and a half of music and it couldn’t be one album, so I decided like a movie I would divide it into two parts,” he says.

For Electronica, Jarre wanted to recruit “people who were influential to me and an inspiration in terms of sound and music… they all have in common that same organic approach to sound.”

Jarre is quick to point out that it’s not a vanity project, propping himself up with random names to tag on as featured artists. Over the last few years he personally travelled to meet each artist at their home studios to discuss the track, often working off a demo he brought them, “to get into their world”.

He adds: “Nowadays you have so many ‘featuring’ albums, and I must say I hate the word, because for me it means you send files through the net to somebody who is going to put a top line on, and you never meet each other. This project was exactly the reverse, I wanted to share the creative process.”

Even though Jarre casts a massive shadow over the last four decades of electronic music, he doesn’t steamroll through and dominate on Electronica, saying it’s “50:50… totally”. His calling card synth swirls and cosmic chord changes are present and correct, but he made concessions, shape-shifting stylistically in demos.

He says: “People you like, you always have preconceived ideas and it felt like in the demos they were behind the composition with me. Then after the meeting and sharing they left me with the possibility of finalising the project, so we have this unique unity between people from very different scenes.”

The word ‘electronica’ has been around since the 90s as an umbrella term for music that bleeps, and you could easily assume Jarre chose the album title to put an aloof stamp on the project: ‘This is the sound of ‘electronica’.

But Jarre is more philosophical, saying simply: “When I choose this title I was aware of the history but I didn’t care. For me, electronica is not a genre. What I love about the title is that it’s a word in two parts — ‘electronic’ and the ‘a’ at the end.

‘Electronic’ is obviously linked to the technology of electronic music and the ‘a’ is a kind of feminine side, a muse. Electra used to be the god of light and of energy. Electronica could be the daughter of Electra, like the Electra of the 21st century. This idea of electronic music’s family, heritage and future, I wanted to express this in the title.”

Sadly, one one of electronic music’s greats, Edgar Froese of Tangerine Dream will now forever be discussed in heritage terms, after he passed away in January this year. Jarre’s collaboration with Tangerine Dream, Zero Gravity, was the last recording Froese made, and Electronica is dedicated to the German pioneer.

It’s surprising that Jean Michel and Tangerine Dream had never collaborated before, considering their decades of parallel synth-prog trailblazing. But Jarre says of their meeting: “I took the car to Edgar Froese’s place, 100 miles from Vienna, and when he opened the door it was really funny because it was like we were old friends, like we met last week. We had so many things to share.

“As a gesture of welcome he offered me a Tangerine Dream version of Oxygene. It was a personal present and I was really moved, but maybe I will let people hear it some day. We spent a lot of time in his studio and the rest of the band came along.

“We joined forces again for the mix and it has been very unique as Edgar passed away a few weeks after we finished this track, the last track of Tangerine Dream with Edgar, their father figure. I had to make the album a tribute to him, as one of the grand and relevant figures in electronic music history.”

Jarre says he sometimes misses the inherent futurism in the early years of electronic experimentalism. His father is the late composer Maurice Jarre, and he studied under the visionary electronic composer and musique concrete innovator Pierre Schaeffer in the late 1960s — an era of widespread optimism and exponential experimentation in science, art and music. Looking back, he admits the era had an air of naivety, but it also felt like a year zero.

He says: “When I started I was entranced by 2001: A Space Odyssey, the first man walking on the Moon and so forth. We had that kind of expectation and hopes toward the future. We were thinking that after the year 2000, the system of education would be better, lots of social problems would be solved, and we would become bionic men and women in the real sense of the word.

“And when the year 2000 came we realised it’s much darker… we are scared about the future, and the heroes of this future are Marvel figures which are quite depressive and are actually coming from the middle of the last century, which is quite strange.”

I get the sense that Jarre wants us to “rebuild the future”, in electronic music at least, by paying homage to its history while avoiding slavish nostalgia.

After decades of experimentalism and pioneering works, electronic music is still considered ‘other’, even when it has become the de facto pop music of the age. We often forget that electronic music is as old as rock’n’roll, but often misses out on the pop culture gravitas — with the first museum of electronic music not opening until next year in Frankfurt.

“It takes its roots from Europe, mainly from Germany, and France, with Stockhausen, Pierre Schaeffer, Pierre Henri, with people people such as Tangerine Dream and Kraftwerk and myself. Then we had british electro pop in the 80s. OK, it was Detroit and Chicago for techno and house… it had crossed the world, the same way that rock’n’roll is everywhere.