Where do you go after one of the the most revered indie-rock albums of the 21st century? Arcade Fire’s 2005 debut Funeral has gone down as one of the defining albums of this generation, with a live reputation to match, including some mesmerising Irish gigs and festival appearances. Their pre-Kraftwerk slot at Electric Picnic 2005 is always one of the first entries on the ‘top Irish gigs ever lists.

When bands have one of these caught-in-amber era-defining records trailing behind, there has so be some diminishing returns, but the reaction to Arcade Fire’s fifth album Everything Now must’ve still felt like an elbow in the face to a band used to fawning respect.

The critical verdict ranged from lukewarm shrugs to hand-wringing derision and outright offence. It was a collective WTF that mirrored the 1987 jaw-drop when David Bowie released his overblown career low point Never Let Me Down.

Stereogum even ran a piece headlined, ‘Remember when Arcade Fire were good?’ And this was before the album was released. Seems the author was underwhelmed by the ABBA-esque title track and Win Butler and co’s ad campaign that promoted dress codes at their gigs, filled social media with offers from the EN media company, and actual fake news. The piece did concede that the LPs The Suburbs and Neon Bible had their iconic moments, but the writer just didn’t dig Reflektor that much.

The dud reviews and reports of Arcade Fire’s demise seem shrill now, though. Of course, Everything Now isn’t a classic, but there’s plenty to like, even if it’s a dilution of Reflektor’s James Murphy-aided twisted disco.

The title track feels like an uplifting parting shot in an indie film, while Put Your Money On Me has a sweet motorik groove and Electric Blue is an odd new wave interlude that’ll be rescued in retrospective think-pieces a few years down the line.

But no matter where you stand with Everything Now, no amount of sneering will derail the Canadians at tonight’s sold-out show  – the opening of their European arena tour.

Arcade Fire have at least 10 songs in their setlist that would be career-best encore songs for plenty of arena rock bands. If Everything Now is a sideswipe sarcastic middle finger to modern culture, their first albums Funeral and Neon Bible are shot through with angst, heart-bursting sincerity and communal catharsis.

The likes of Wake Up, Intervention, Neighbourhood #3, Sprawl II, No Cars Go are all-time classics at this stage, and only the most hardened cynic could brush them off.

On this year they’re playing ‘in the round’ in a boxing ring and they’ll be going the distance with a set that goes over 20 songs.

Expect the selected highlights from Everything Now (yes there are some), along with some of the most enduring goosebump indie anthems of the last 15 years. By the time Wake Up comes on in the encore you won’t want them to leave the stage – lucky for you as the song seems to never end, in a good way. You’ll be humming that intro chant all weekend. 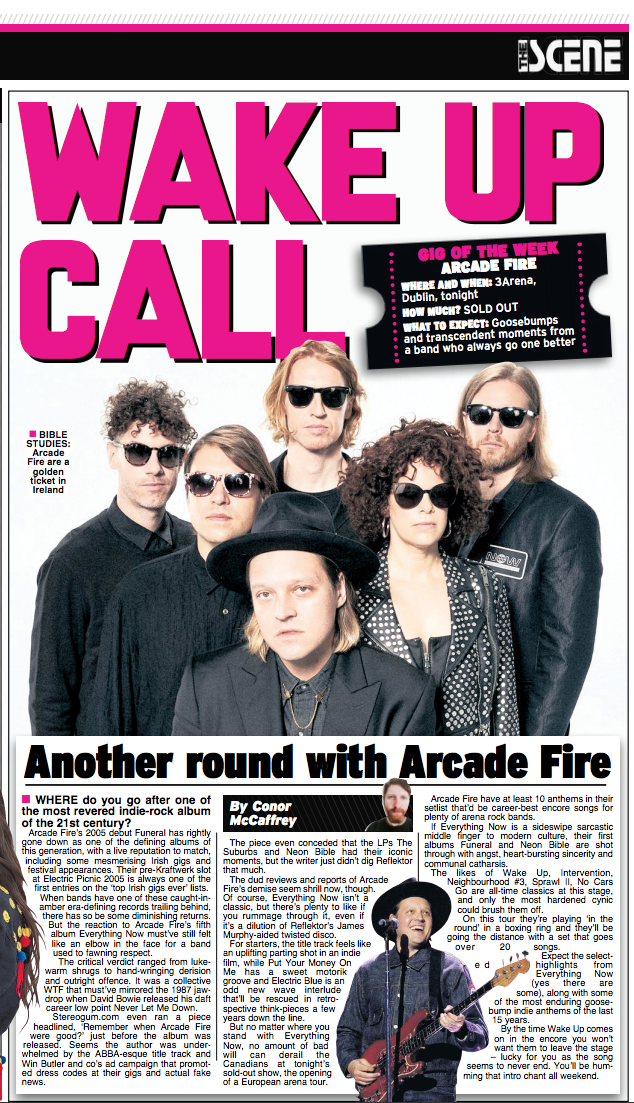