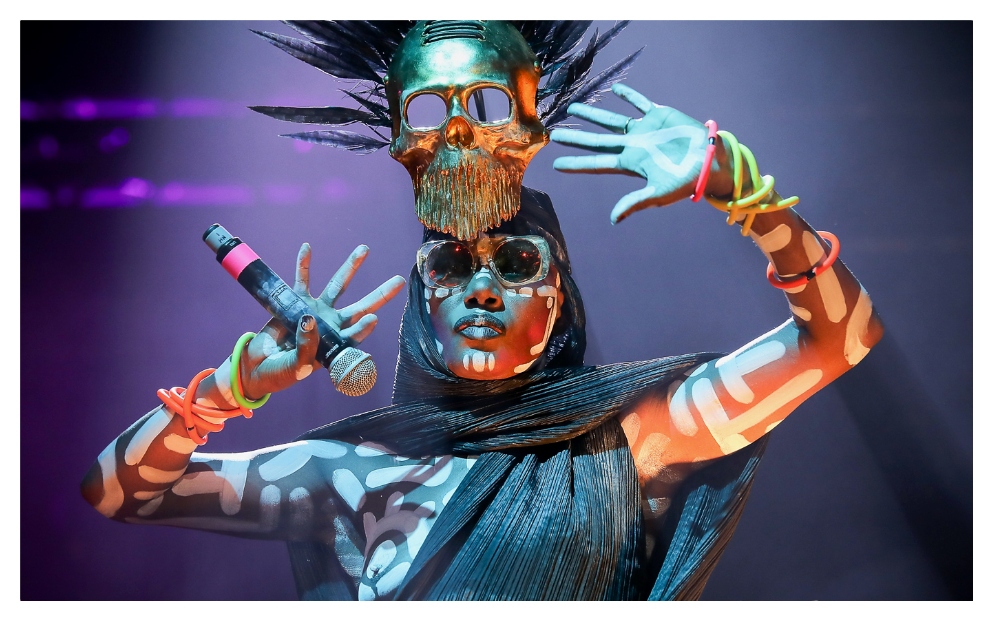 “I smell something burning… are you on fire?!”

Grace Jones’ intro at Exit Festival in Serbia last weekend was less stage banter, more a strict command from the fiercest woman in pop history. The short answer is, yeah we all were – that was my fifth time seeing Miss Grace and you never get used to her prowling on stage with panther strides, cape billowing in a wind machine turned up to 11.

Add to that the hula-hooping, the Keith Haring body paint over naked flesh, the muscleman pole-dancing, the disco ball bowler hat and her OTT headdresses, and it all gets a bit much.

Grace Jones lives her life as a work of performance art – there isn’t a single bad photo, quote or dagger-eye stare, and she’s got a permanent exhibition room in the Centre Pompidou in Paris. But the strops, Studio 54 stunts and chat show slaps can often overshadow the serious artist, equally at home duetting with Pavarotti as changing the digital dub game with Sly and Robbie on her 1981 avant-garde pop masterpiece Nightclubbing. Sophie Fiennes’ recent documentary Bloodlight and Bami casts another light on Jones, as it flits between her visiting Jamaica, eating meals with her family, larking about in food markets, and recording her last album Hurricane. In between candid scenes of her pulling fish apart with her hands at the dinner table, or gleefully necking oysters, we get sublime footage of her 2016 shows at the Olympia – every song with its own minimal lighting set and costume change. Grace banging the gong-sized cymbals during Warm Leatherette is a personal favourite gig memory, along with her lying on her back weeping as she’s gradually covered in red roses.

And don’t forget the belters – Slave to the Rhythm is one of the all-time pop anthems and Pull Up to the Bumper is the best car/sex metaphor song of them all. Whether it’s disco, electronic dub, new wave or aloof pop, she’s got you covered. And if you’re a bouncer at the front of the stage, prepare your shoulders for the ride of your life, and you might get your ass slapped while you’re at it.