For a band weighed down by so much baggage and split opinion, U2’s reputation has held up in the live arena for decades.

You forget they’re a band who take plenty of risks, while many other heritage rock acts stick to the format of a fairly rigid 15-song setlist and a few from the new album to let people go for a pint and a piss.

Taking the piss out of U2 — specifically Bono — has been a national sport for years, but there’s always a massive surge of anticipation when Ireland’s most famous band comes home to Dublin. They ticked off a big victory lap with the Joshua Tree 30th anniversary show at Croke Park last year, and now they’re set to come inside for these four 3Arena shows.

U2 detractors usually focus on their earnestness, and Bono does lose the run of himself, with Larry, Edge and Adam often shaking their heads in the background. At the same time, they’ve always been able to see the irony and the absurdity in rock’n’roll as well as its magic. The early 90s Zoo TV tour has gone down as an audio-visual immersive masterpiece, from the Berlin Bowie references, to the hanging Trabant cars and the warnings of the mind rot distraction of television, with the band surrounded by perpetually flickering TV sets. 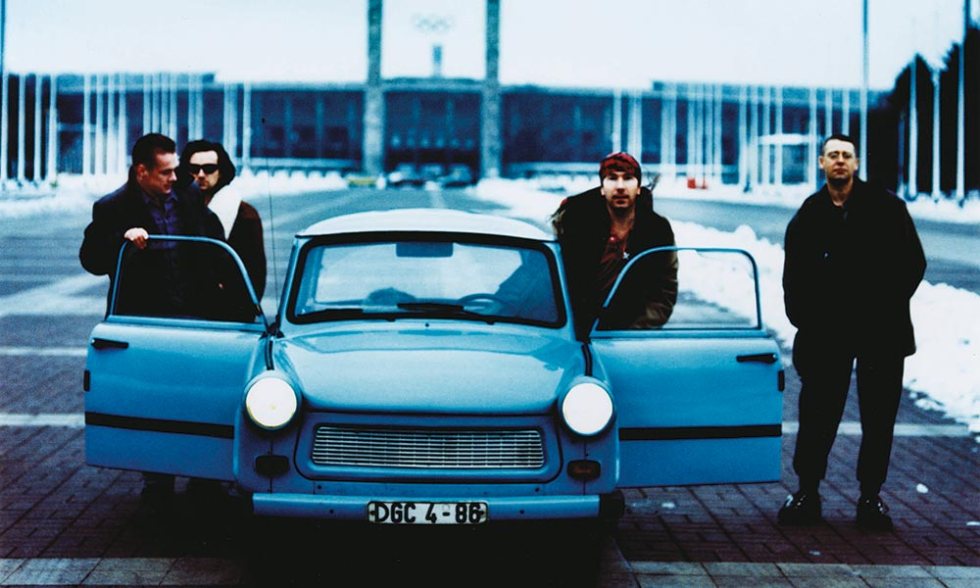 They then took the AV overload to disco Spinal Tap levels on 1997’s Popmart tour, with the infamous glitterball lemon, the golden arch, the Edge karaoke section and an alarming amount of disco and industrial clatter for all their Joshua Tree fans who just about survived Zooropa.

The band held their hands up after the grand folly, famously “reapplying to the biggest band in the world” with their safe as houses stadium rock albums All That You Can’t Leave Behind and How to Dismantle an Atomic Bomb.

Of course they got the job back, but for many it felt like they were coasting on stadium rock bombast for years – until now.

While the Joshua Tree tour was the ultimate crowd-pleasing concession, EXPERIENCE + iNNOCENCE rounds up one of the most contemplative eras in the history of the band. Their latest two albums, Songs of Innocence and Songs of Experience, were the most biographical in their history, informed by their childhood years growing up on the northside, with comments on the social and political changes in Ireland since the 1970s.

The records also contain Bono’s most intensely personal moments, with ballads for his wife Ali and one, Song For Iris, about his mother who died when he was a teenager.

They didn’t forget to rock out either, after the relative lukewarm response to 2009’s No Line on the Horizon. Songs of Innocence was dedicated to the memory of Joe Strummer, and the lead single was the Ballad of Joey Ramone, and Innocence single The Blackout was their strongest lead-in track since their mid-noughties reclaiming of their stadium crown.

The introspective themes on the album mean a more intimate and immersive show — even though ‘intimate’ has a different meaning for U2 than most bands. After the 360° stadium tour spectacle, U2 came indoors for the first time in decades, with a narrative presentation that comes full circle with this tour, as many threads from the iNNOCENCE leg get tied up here.

The visuals have also been recalibrated with the highest definition concert screens in history, with the “cage” and the walkway making a return. The setlist has also been overhauled, bringing back some Achtung Baby classics like The Fly, Zoo Station and underrated deep cut Acrobat. And if you’re a best-of CD kinda fan you’ll be disappointed they’ve fully shelved the Joshua Tree after the tour last year.

Then again, it’s another example of seeing a project through instead of taking an easier way out with anthems like Where the Streets Have No Name and With Or Without You.

Who knows whether they’ll do anything as brilliantly daft as PopMart again, but U2 won’t stay ‘intimate’ for long. And with three years until the 30th anniversary of their true masterpiece Achtung Baby, we can only hope they keep having more outrageous ideas.