With so many festivals in Ireland these days and new ones popping up almost weekly during the summer, it’s easy to take them for granted – miss one and you’ll get your kicks soon enough without much effort.

But All Together Now stood out when it was introduced last year, leaving a trail of goodwill and a buzz that recalled the first few years of Electric Picnic when Stradbally kickstarted the idea of ‘boutique festivals’ in Ireland.

Now of course the Picnic is Ireland’s biggest festival success story, an end of summer rite of passage that sells out before the line-up is even released, with a broader set of bookings among the underground acts, in line with its ever-expanding capacity and commercial sponsorship.

All Together Now was started last year as a nod to those first few Picnics in 2004 and 2005 — a refinement of the classic formula — manageable crowd sizes, a boutique’ presentation, plenty of extracurricular activities and of course a thoughtfully curated line-up.

Most importantly, the setting in Curraghmore House in Co Waterford gripped everyone’s imagination last year. Punters have been raving about the stately home’s lush woodland, landscape gardens, lake and streams, and the installations and interactive artworks that made the first edition such a joy. And with the over-21 age limit It seemed to cater for the festival head who’d outgrown the Picnic, Forbidden Fruit and Longitude. The early Picnic vibe was down to visionary festival promoter John Reynolds, who sadly passed away just before Metropolis last winter – another of his innovative productions. It was always going to be rolling success story, and the 20,000 tickets sold out well in advance.

Like last year, ATN round two is an eclectic showcase of Irish and international acts, ranging from all-time music legends to emerging buzz bands. And over the weekend you can tap in to indie, techno, electronica, hip-hop, electro-pop, post-punk, dub, reggae, neosoul, classical, acoustic singer-songwriters and plenty more to discover.

As the first headliner announced, the National is as solid as it gets – the Ohio indie-rock burn with an intensity that’s never dimmed over their many Irish shows, from festival headliners, to arena shows, outdoor gigs and theatre residencies.

Just before Orbital tonight, Dublin punks Fontaines DC will be out to prove they’re worth the hype as the most talked-about band in Ireland — or anywhere else for that matter.

Elsewhere, other big acts to tick off include Neneh Cherry and her late period bass-heavy electronica, the gothic indie of Anna Calvi, Kojaque’s introspective hip-hop and Black Midi’s avant-garde take on intricate math-rock.

For a classical contemporary detour, the Trinity Orchestra is taking on the back catalogue of Leonard Cohen, while Norwegian pianist and composer Olafur Arnalds plays a solo show, as well as performing with his partner Janus Rasmussen in Kisamos, whose refined techno and serene passages will share a similar space to Jon Hopkins.

And if the techno gets too much there’s plenty to help a wind-down. Reggae legends the Wailers will bring the bass-heavy vibes, while Clash legend Paul Simonon will also call on dub basslines as part of The Good, the Bad and the Queen, along with veteran polymath Damon Albarn.

On an even more relaxed note, the Lawns of Tranquility wellness area will help ease the camping aches, and you can even learn a thing or two at the Curious Minds area, where musicians will be collaborating with spoken word artists and poets, and discussion and debate will flow through the weekend. Patti Smith’s talk will surely be one of the most inspirational events of ATN, just one of the many one-off happenings that’ll make Chapter Two another one for the memory banks. 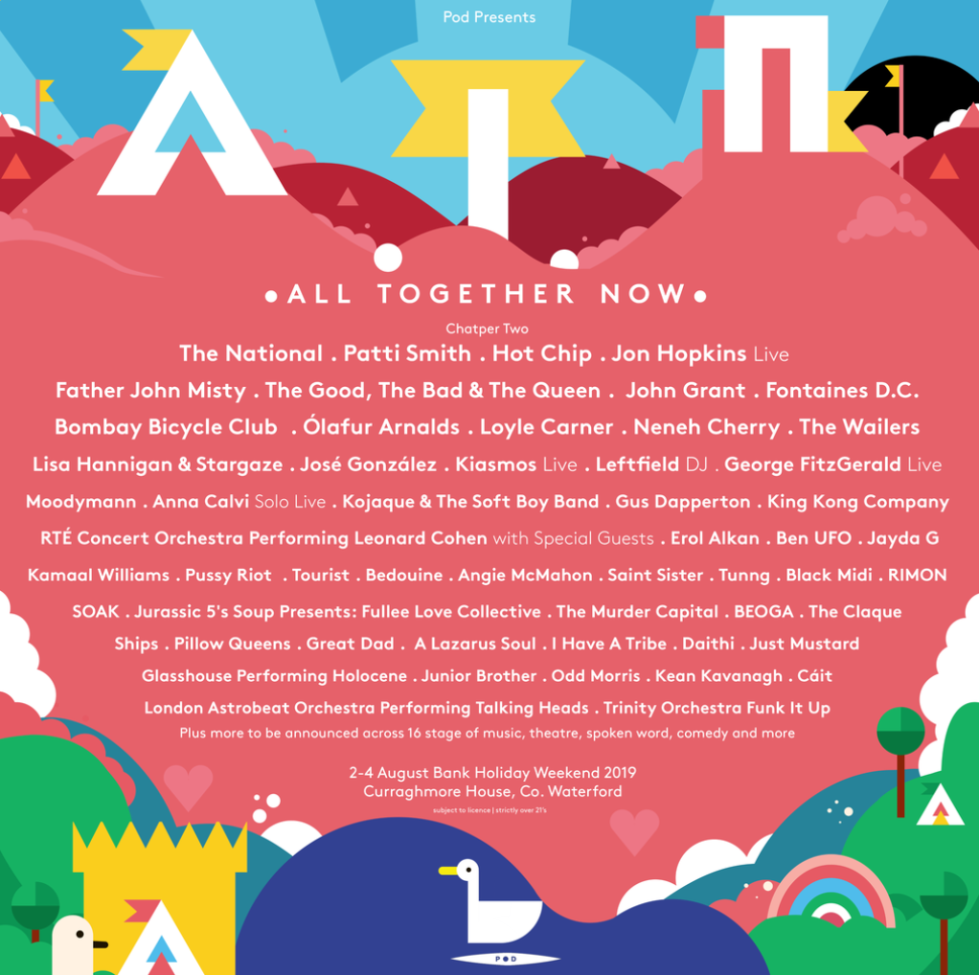