It’s fair to say no one’s really here for the new stuff. Herbie’s just back from headlining the Cork Jazz Festival where he picked up the Guinness Jazz Legend award, and that’s what the people have paid their 50 bucks for. Then again, he’s touring The Imagine Project – a hit and miss world music cover album featuring collaborations with the good (Tinariwen, the Chieftans, Wayne Shorter), the bad (James Morrison, John Legend) and the WTF (Pink). It’s been a guessing game wondering how it’ll pan out but at least he dives straight in with the goods, flexing his fingers in a grand piano workout, taking in Spank-A-Lee and improvised solos. He’s brought along a guitarist, bassist, second keyboard player and a drummer who plays like he’s got eight arms, but he’s left the horns at home – they’ll appear “by the power of the hard drive,” he explains.

In a 50-year career that’s seen the pioneer headhunted by Miles Davis, do a Dylan-style ‘Judas’ by going electric, cross over into electro and hip-hop and even dabble in drum & bass, Hancock’s latest album is a frustrating backtrack with its eye on the Grammy crowd. The Imagine Project songs, while pulled off slickly, interrupt the flow in the Grand Canal Theatre – at one point we’re lost in a 15-minute space-jazz trip with the Headhunters classic Watermelon Man, before crashing to earth with an over-egged version of John Lennon’s Imagine, which teeters on the brink of X Factor schmaltz. Singer Kristina Train’s technical ability is obvious but she’s one for voice coaches to admire, and when she sings Don’t Give Up – well she’s no Kate Bush. 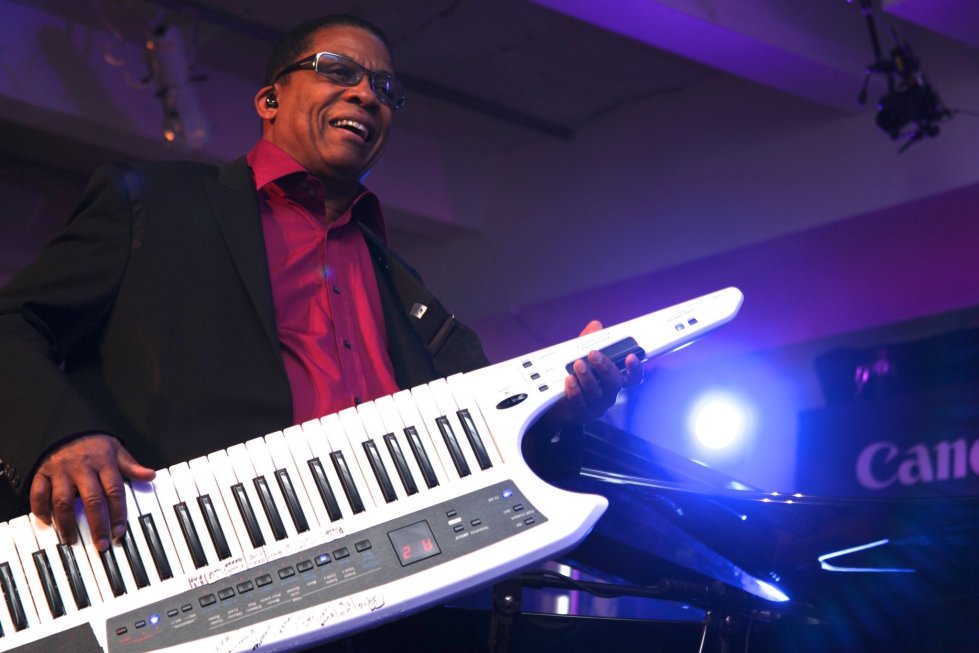 Hancock tells the audience his ambition for the record was to distil songs of protest and struggle into a universal message of hope, and the songs work when they fly off on a tangent from the originals. The rousing fusion of Tinariwen’s Tamatant Tilay and Bob Marley’s Exodus could get a few people up dancing if the theatre’s plush seats weren’t so damn comfortable, and Lisa Hannigan deserves the home crowd cheers for her take on Dylan’s The Times They Are a-Changin’, with the ‘hard drive’ Chieftans helping out.

The ’60s and ’70s classics seal the deal though, stretched out and contorted into extended jams. The band leaves the stage while Hancock performs a gripping virtuoso solo, teasing, delicately tinkering, before 10 minutes pass, the other players return and deftly slink into Round Midnight, before Cantaloupe Island creeps in as Herbie shuffles between grand piano and Korg keyboard, his lightning finger movements mapped onto his face as he pulls some textbook jazz expressions. The showboating is turned up to 11 when he straps on the keytar and bassist James Genus ushers in the squelchy bassline on Chameleon – Hancock’s signature Headhunters tune that has people in the back rows out of their seats. He throws everything at the 20-minute finale – we get drum solos, slap bass interludes, the iconic filthy sampled horn motif and Herbie trading licks with Lionel Loueke, whose guitar squalls sound every bit as alien as the keytar robot riffs. It’s a thrilling send-off that steamrolls over the few hiccups from earlier. Then again, Imagine if he’d played Rockit. As Herbie and co take a bow his 1983 electro belter starts ringing round the theatre over the PA, but we’re left hanging mid-breakdance when it fades out after a few bars. Ah well, can’t win ’em all.