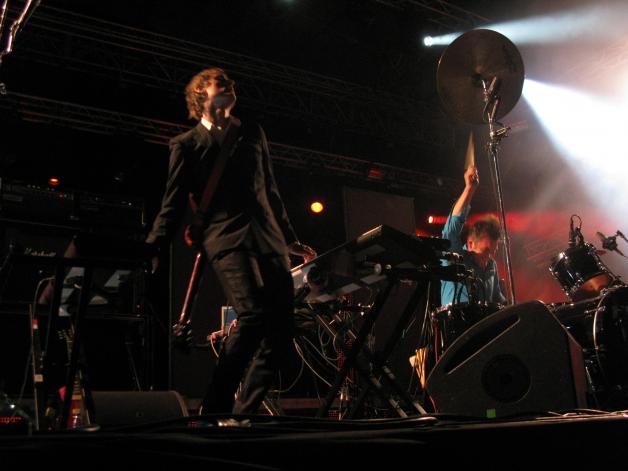 If you’re going to Forbidden Fruit this weekend, don’t expect Battles to play ‘the hits’. Since last weekend, Primavera punters have been raving about how “brave” Battles were on the Friday night – a virtual headline slot at one of Europe’s top festivals, the biggest crowd they’ve ever played to, and they committed the cliché rock’n’roll faux pas, playing only ‘the new stuff’. Their new second album Gloss Drop wasn’t even released yet (it’s out today). This is the rock experimentalists’ first tour since losing their multi-instrumentalist vocalist Tyondai Braxton, who was a focal point in the previous live shows, looping his voice over and over, stamping all over effects pedals, wringing all he could from the convoluted riffs of their landmark 2007 album Mirrored. But never mind the singer – everyone knows the real frontman of Battles is drummer John Stanier, with his centre stage kit and that 10ft high cymbal that gives you a rush every time he leaps forward to knock it into next week.

There’s a heaving mass at the Ray Ban Stage and its surrounding tiered steps, jerkily dancing to shifting rhythms, algorithmic guitar loops and future-funk interludes, and it takes around 45 minutes or so before everyone realises we won’t be hearing ‘Atlas’ and ‘Tonto’ and the rest. Without singers on stage, they beam Gloss Drop’s videos of guest singers on the big screen – techno producer Matias Aguayo on the scratchy loose jam of Ice Cream, and the industrial metallic sheen of My Machines has Gary Numan in full post-Reznor mode, all blue lighting and eyeliner. It’s hard to keep your eye on the screen though, Battles are stomping around with as much enthusiasm as a punk band playing their first gig. Maybe it’s just good old fashioned confidence in ‘the new stuff’, instead of bravery.

The most surreal moment of Primavera comes when I’ve lost my mates for a few hours, then look up and see a couple of them on stage for the inevitable Odd Future pandemonium stage invasion. The hip-hop upstarts drag hundreds over the barriers past bemused bouncers who realise it’s better to leave those kids alone. Then again, LA’s 10-strong Odd Future Wolf Gang Kill Them All have ‘previous’ in this department so it was easy to predict this riot. I predict the stage won’t be such an easy target when Tyler the Creator and co descend on Oxegen next month. Of course it’s faintly ridiculous to see a gang of teens scream “KILL PEOPLE BURN SHIT FUCK SCHOOL” after the controlled aggression and titanic sound of Swans, but it’s one of the most enduring sights of the weekend.

Not that you can see much of the Wolf Gang on stage, apart from manic silhouettes through strobes and Hammer Horror levels of dry ice. And it’s not only school they’re giving the finger to – it’s America, the ‘government’, the internet, it’s “fuck the news, fuck the press, fuck the world and fuck you” too, whatever they can think of. It’s as ramshackle as we’d all imagined – distorted beats from turning everything up to 11, screaming on top of each other, finishing each other’s rhymes, beating their chests. You have to forgive their breathlessness, they’re leaping 10ft from the stage into the crowd, breaking mics, ripping tops off – throwing beer around. They reel it in a bit for Tyler’s broody Yonkers, as the bass ruptures the Parc del Forum floor. But as for Radicals – damn those pesky kids again, making the Wu-Tang look like Usher.

Originally in state.ie. Featured photo by Alan Moore for State