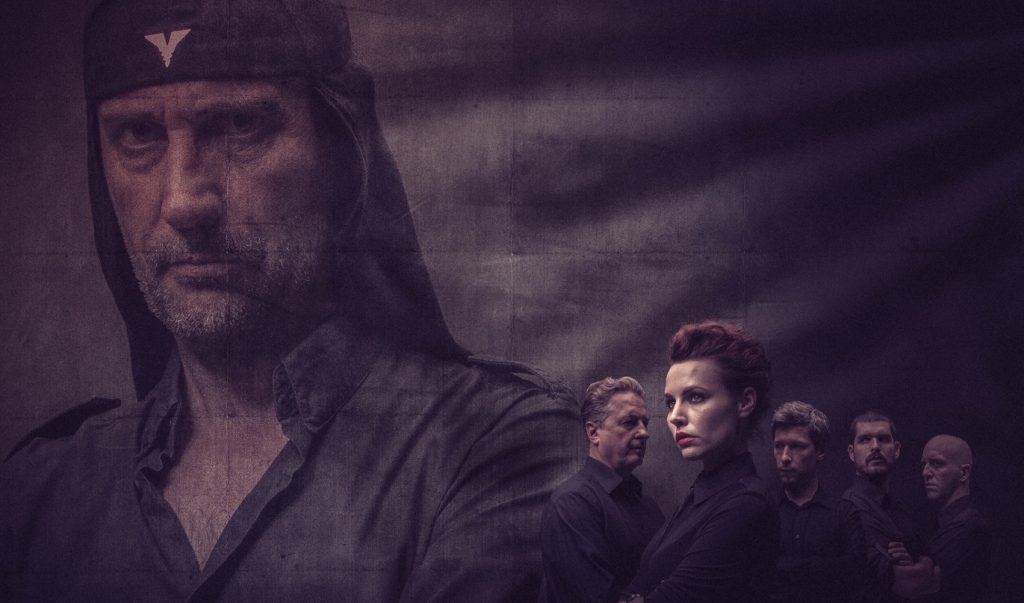 There’s no comfort zone with Laibach – their live show is simultaneously a concert, performance art prank, army drill and totalitarian rally that swings left to right like a pendulum. After Laibach’s performance earlier this year at Tate Modern, they’re back in another converted power plant – and Berghain’s brutalist facade, cast iron steps, caged walkways and jutting cogs form the perfect steampunk backdrop for this machine to rage. Berghain is all eyes and ears, and with a click of his fingers, frontman / Great Dictator Milan Fras could have us all burning books in no time, entranced by his thousand-yard stare and bowels of the Earth ranting.

After 30-odd years, Laibach may still be Europe’s most grossly misunderstood act. Forged in Yugoslav-controlled Slovenia in the vacuum left by Marshal Tito’s death, their first mission was to take on the totalitarian state, not by opposing it but by assuming its shape as a grotesque parody – military uniforms, nationalist symbols, a chest-beating martial style and a manifesto called ‘Ten Items of the Covenant’. They assumed a dissident role as the music wing of the Neue Slowenische Kunst (New Slovenian Arts) guerilla movement, a self-declared utopian state with its own passport, Ministry of Culture and news bulletins. The band was officially forbidden by the Yugoslav state, which also criminalised the use of the name Laibach – the Nazi term for Slovenia’s capital Lubljana during WWII.

While many western groups evoke a caustic ‘industrial’ sound with synth patches, software and samples, Laibach’s members had this grit under their nails from day one, working in cement factories in Trbovlje – the heavily industrialised coal mining town that has the tallest factory chimney in Europe. The uniforms are a throwback to their mandatory military service, when they’d customise jackets with their trademark black cross armbands and risk a court martial by sneaking off to play covert gigs, dropping army smoke bombs instead of dry ice. Even Fras’s infamous headpiece – part do-rag, pharaoh headdress and military kepi – is a 19th century leather coal mining hat, another nod to their industrial ancestors. In another inspired assignment, they’re playing a concert in Slovenia next week, 200 metres underground in a mine shaft. The show is billed as Kohle Ist Brot (Coal Is Bread ).

Some 20 albums after their proto-industrial birth, Laibach’s career is one of perpetual contradictions and tangents. They’ve skimmed the charts with subverted versions of Europop hits, covered the whole of the Beatles’ Let It Be album, accidentally invented Rammstein, written music for 15 theatre productions, performed with the Lubljana Philharmonic and been targeted by a car bomb in Sarajevo on their Occupied NATO Tour in 1995. Their staunchest ally is the eminent philosopher and cultural theorist Slavoj Zizec and a venn diagram of their past work includes their take on Jesus Christ Superstar, Status Quo, Macbeth, Wagner and Bach symphonies, a hatchet job on selected national anthems and Europe’s The Final Countdown. 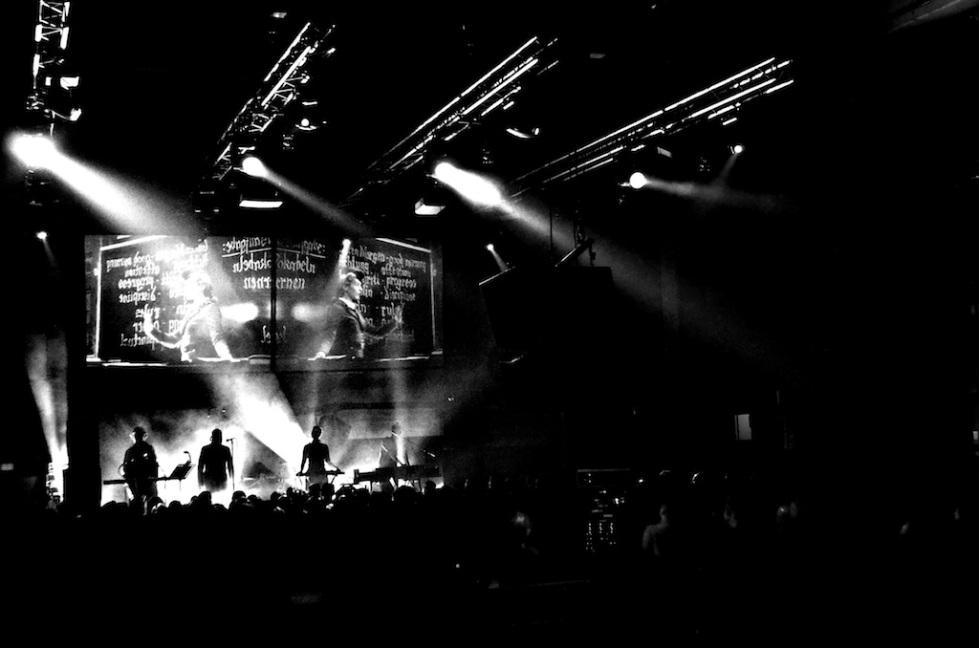 But for all their avant-garde leanings, Laibach are in Berlin to promote their soundtrack to Iron Sky – the low budget sci-fi comedy about Nazis on the Moon. The We Come In Peace tour billing is a bit of a false alarm, maybe an excuse to plaster Europe with Nazi Iron Eagle posters. The brooding piano-led pomp of Under the Iron Sky is merely an extended trailer for the film, with footage that’s been on YouTube for a few years. New-ish female recruit Mina Spiler soon dumps all over her serene vocals with a feedback-heavy megaphone call to arms as Ti Ki Izzivas [You Who Challenge] knocks us back behind the 80s Iron Curtain with its jackhammer drums and choral refrain. Over two hours, Laibach distil their vast catalogue into a factory floor production of their ‘best bits’ – the Throbbing Gristle-style acid rain industrial pieces, neoclassical fanfares, grating techno stomps and refined piano passages. Those who ‘prefer their earlier stuff’ get pole-axed by slabs of ‘Monumental Retro Avant Garde’ – the 80s assembly-line din of Smrt Za Smrt [Death For Death] and Brat Moj (Brother of Mine) oiled and tweaked to pass their modern day inspection.

As ever, Laibach’s parody has the potential to spill over into downright absurdity. Staying in character, they’re as static as Kraftwerk on stage, with as little interaction as their Teutonic forefathers. Their assault on western music totems is often devastating but they can cross the line. A sluggish take on Bob Dylan’s Ballad of a Thin Man doesn’t translate into Laibach-spiel – with Fras playing the James Bond baddie card, all threatening Euro goon bluster.

More often they’re dead centre on the bullseye. The suite of covers in Berghain includes hulking metallic versions of Serge Gainsbourg’s Love on the Beat, The Normal’s Warm Leatherette and DAF’s Alle Gegen Alle. Queen’s One Vision morphs into the German language Gebert einer Nation [Birth of a Nation] – wilfully co-opting Freddie’s lines verbatim as fascist double entendres: “One Flesh… One true religion… One voice, one hope… One real decision.” That anthem’s pompous Opus Dei companion piece Leben Ist Leben, a cover of the cheesy Europop hit Life Is Life, is another lesson in how to sound grandiose and slightly menacing – just add some Deutsch.

Laibach’s industrial past resonates with Berghain’s former life as an imposing DDR power station, but the set comes full circle in the home of European techno as Tanz Mit Laibach [Dance with Laibach] fires up and the big screens hammer home the video of Milan Fras’s 24-hole jackboots marching to the Panzer attack kick drum. The footage of Fras – a cross between Himmler and Techno Viking – stomping over waste ground amid medieval Danse Macabre skeletons is genuinely thrilling, a case of goose step goosebumps that drags us punching and screaming into the frantic acid attack of encore Das Spiel Ist Aus. Consider us conscripted into the Laibach army: Kammerad, komm tanz mit mir!

But even as Milan Fras takes a bow and smirks ever so slightly, the Laibach onslaught on our sensibilities doesn’t end as they exit the stage. At the merch stand on the way out, among the lino prints, philosophy essays, headbands and defaced Yugoslav People’s Army shirts, we spot ‘Antisemitism Condoms’ and ‘100% organic soap with special ingredient: Laibach S3 – saliva, sweat and sperm’. A T-shirt will do for now.