One of the most surreal festival moments in recent years was Grace Jones getting a horsey-back off a bouncer at Electric Picnic along the front row last year — slapping his arse for effect.

And after the ripped male pole dancer’s acrobatics, the tribal chanting, Keith Haring-inspired body paint over naked flesh and Miss Jones hula-hooping, the rest of the Picnic didn’t seem to matter that much.

Miss Jones sure knows how to make an entrance — even becoming a part of early Picnic folklore by refusing to travel to Stradbally in anything less than a white limo for her 2008 appearance.

These anecdotes are just a few of the hundreds that follow Jones around — from riding into studio 54 on a Bengal tiger, to postponing studio sessions in 1985 because she spent the weekend burning all of her then-partner Dolph Lundgren’s trousers.

Grace Jones created the idea of the outrageous diva and revels in her reputation, even taking down modern chancers like Lady Gaga in her brilliant autobiography— called I’ll Never Write My Memoirs.

But even though we’ve only recently had Grace from afar at Irish festivals, she’s taking it to the great indoors for two shows at the Olympia. When tickets for the first show went on sale last month they were gone by 9.01am, and I doubt all those charming touts have many copies of Nightclubbing or Warm Leatherette on their record shelves at home, or MP3s on their Nokia burners.

Still, fans got a second chance when tickets for a second date went on sale last week, so hopefully that’ll give the scalpers a harder job.

So what does the hottest ticket of the season get you? Well apart from seeing Grace in one of her most ‘intimate’ gigs in years, you’ll also get a chance to appear in her new documentary, Grace Jones — The Musical of My Life, as part of the crowd at least.

The film is a joint Irish-British production that’s been over a decade in the making, with director Sophie Fiennes calling it an “extraordinary journey ‘following the Yellow Brick Road’”, which sounds intriguing enough, without its subject matter.

And what a subject. Grace Jones is one of the most singular pop stars and fashion icons of the last 40 years, a headstrong innovator and muse who’s as happy performing with reggae and dub legends Sly & Robbie, disco and pop Midas man Nile Rodgers or opera great Pavarotti.

Grace Jones may be pop culture shorthand for outrageous strops, Medusa-level dagger eyes and boisterous confrontation, but her memoir reveals a playful side, a masterplan to carry on her life as a living work of art.

Leaving aside folklore clubland stunts, avant-garde modelling shoots, a frightening role in Vamp and an even scarier role as an anti-Bond girl, Grace Jones’s music often gets overlooked. True, on her first three albums, Portfolio, Fame and Muse, she handed over quite a lot of creative control to disco producer Tom Moulton, but she was still the most fiery performer when disco was drowning in parody and chart fluff. 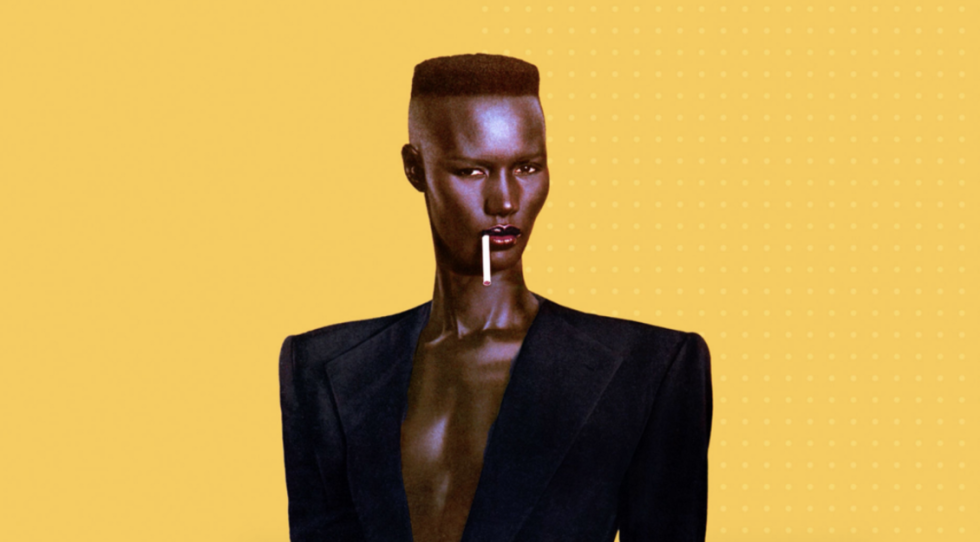 In 1980, Jones tapped back into her Jamaican homeland by teaming up with Kingston rhythm section Sly & Robbie and producer Chris Blackwell for Warm Leatherette and Nightclubbing — a one-two punch as hard as any in the decade. The albums’ electronic dub and new wave metallic rhythms, along with Grace’s robo-patois and commanding drawl, was a one-off template that no one has dared to copy since.

As well as calling card originals like Pull Up to the Bumper, Grace Jones is also a master of reinterpretation, with her aloof and detached covers of The Police, The Pretenders, Bill Withers and Bowie & Iggy often the definitive versions. Tense, swirling dub was also a starting point for her last album Hurricane in 2008, which updated the minimal skeletal beats of Sly & Robbie to Massive Attack at peak dread levels and led to her most menacing single to date in Corporate Cannibal.

Still, there’s plenty of pop euphoria in that songbook, and if anyone can make a party happen, it’s Miss Jones. And it ain’t over till she hula-hoops her whole way through Slave to the Rhythm at the Olympia.