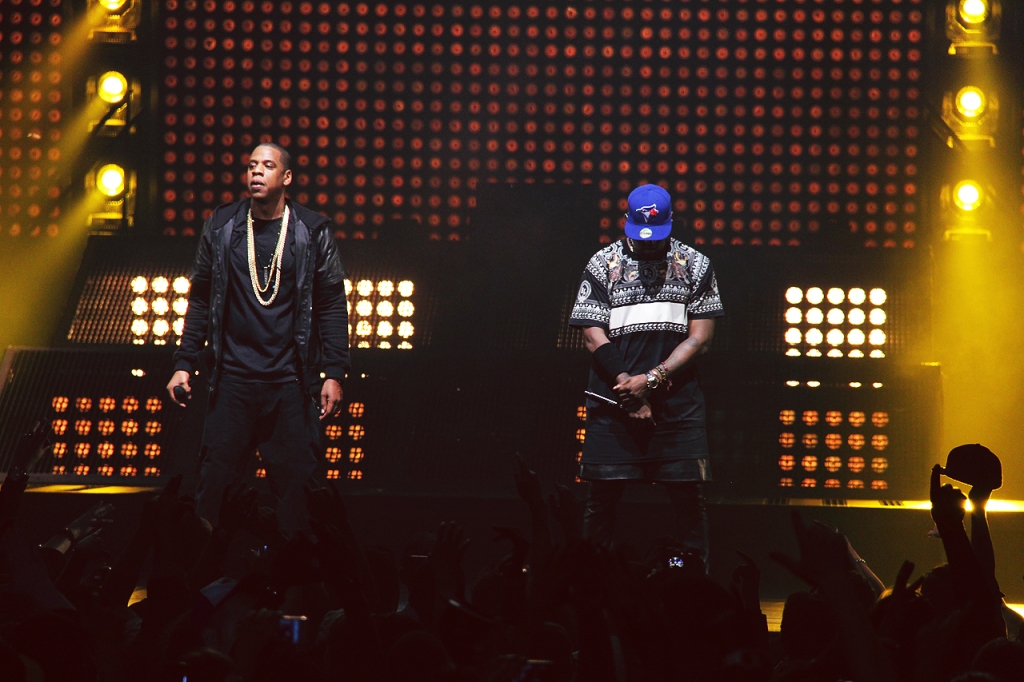 This shit is… fuckin’ ridiculous. Kanye’s own lyric could be a one-line review of his Watch the Throne live show with Jay-Z, a 40-song epic that cashes in all your craic tokens at once. It’s a blockbuster from the off, as the two hip-hop gladiators rise from two 50ft LED podium cubes in the middle of the floor for the operatic H.A.M., and snarling rottweiler visuals rile the crowd. The Dublin shows fall on Kanye’s birthday weekend too, but he and Jay are the ones dishing out the presents in the O2.

Over the two-and-a-half hours, the dial is stuck at 9.9 on the Rammstein scale, as the world’s two top-seeded rappers tear through a top 40 of the last decade. We get pulsing lasers in Flashing Lights, dramatic slow motion National Geographic-style footage of wild cats on Welcome to the Jungle, gold necklaces the size of bike chains, costume changes (Kanye in a WTF? leather kilt) and billion-pixel hi-def screens that trace every trickle of sweat dripping off the duo’s foreheads. And there must be teleport machines – they’re popping up all over the arena, between the stage and their own personal plinths.

The Watch the Throne tour is officially the live embodiment of Yeezy and Hova’s decadent album of the same name. But these two go way, way back – ‘Big Brother’ Jay-Z (“an idol in my eyes, god of the game”) signed up the wide-eyed Kanye in 2000 as a producer for his Roc-a-Fella Records, and his protégé’s big break came with production credits on 2001’s The Blueprint. They’ve been tied together since – and joint tag team efforts like Monster, Diamonds From Sierra Leone and Run This Town seam with the Throne tracks and straight solo mini-sets at the O2.

When there’s only one on stage, it’s the hyper Kanye who’s begging for the love with his trademark ALL CAPS bluster. He frantically covers all corners of the arena like he’s in circuit training, punching the air for electro bangers like Stronger, dropping to his knees on the confessional Runaway. One of his infamous live tantrums is narrowly avoided as he stops the show during All of the Lights when “some motherfucker’s throwing hard shit, a coin on stage”, disrupting his “perfect show… flawless victory”. He laughs it off though, and the PA fires up again, we’re all good.

In contrast, Jay-Z effortlessly plays the rap godfather with a raised eyebrow during Hard Knock Life and Izzo (H.O.V.A.), meticulously rhyming, adjusting his baseball cap, shooting us knowing winks. “Y’all know where I’m from,” he throws out, as Sinatra’s New York, New York segues into Empire State of Mind, and thousands try to hit Alicia Keys’ high notes in the chorus. It sparks hardest when the pair go toe-to-toe on the stage, either across the arena on their platforms on a ramped-up Who Gon’ Stop Me, or back-to-back on the incendiary That’s My Bitch. In a rare contemplative interlude, the pair sit side-by-side for their Nina Simone-sampling New Day, legs dangling over the stage, like two pals sharing a beer pondering the perils of fatherhood.

Most of the show’s home runs are scored when subtlety is torched in pyrotechnic blasts. The cock-sure rappers have no qualms about brazenly dropping samples and snippets from Michael Jackson, Louis Armstrong and Curtis Mayfield among mega-hit medleys like Big Pimpin’ into Gold Digger into 99 Problems. It may seem like they’re two uncouth upstarts weaselling their way into an exclusive members’ club, but with a game-changing show like this, they don’t seem so cheeky after all.

Hip-hop gigs are all-too-often a shambles: wasted out-of-breath MCs; late shows; half-hour shows; no shows; no-brain hype men hawking merchandise from the stage. But Jay-Z and Kanye have drafted a new blueprint for live hip-hop, and pure pop spectacle in general. We can forgive all their indulgences. Niggas in Paris for the encore? We’ll take four, cheers.