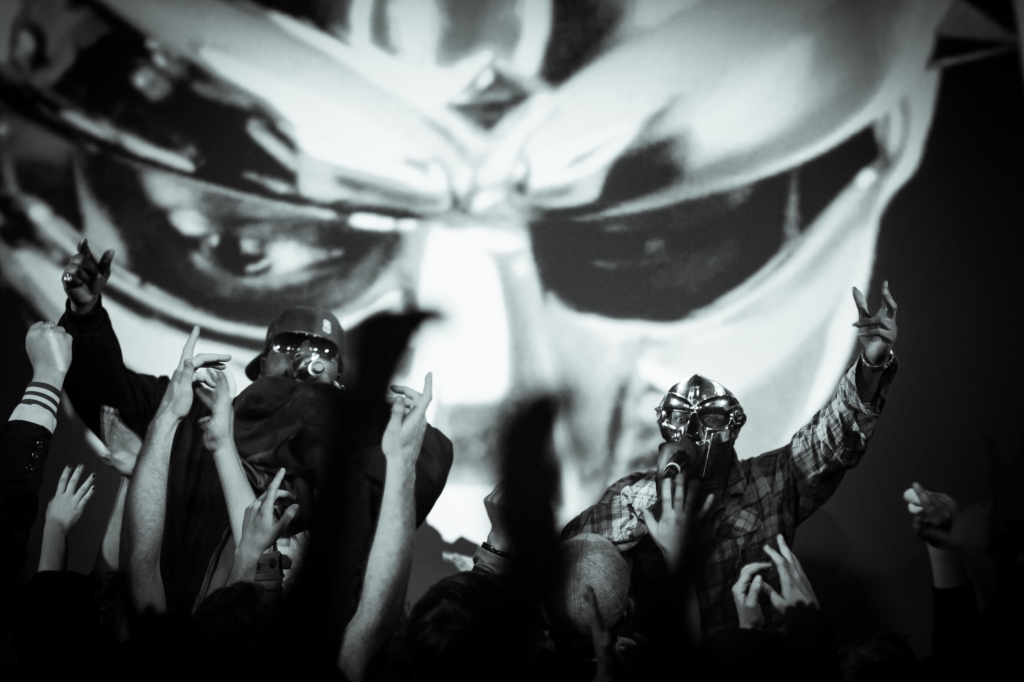 Doom is rap’s most enigmatic character – a cult comic book supervillain whose alter-egos include a powerful sorcerer, genius inventor and a three-headed space monster. It’s funny then to see Metal Face casually ambling onto the Sugar Club stage in a check shirt and maroon cardigan, looking like he’s spent Sunday evening on the couch watching the Antiques Roadshow rather than hatching dastardly plans.

He’s late too, but that’s a given. We’re always waiting to see what he’ll do next. A previous Dublin show was a surreal test of fans’ patience as he turned up two hours late and wafted around in a stoned fug for 45 minutes, losing phono leads and playing beats through his Macbook in front of a DJ with no vinyl on the decks. Judging by the near-full house though, he still gets a free pass from his forgiving followers, who know flashes of brilliance are always on the tip of his tongue.

Thankfully he’s also kicked his ‘Doomposter’ habit of sending out phony goons to lip sync at gigs. You still find yourself giving him the once over when he comes on, but there’s no mistaking the pot belly and smoked-out drawl as he enters stage left with his long-standing man-mountain hype man Big Benn Klingon. Another addition to his live set-up is jazz/hip-hop drummer Kwake, and you wonder where he’s been all this time – there’s a physical urgency to the kicks and rolls as Kwake beefs up the rare lounge grooves early on during Hoe Cakes, Rhymes Like Dimes and One Beer, aping Doom’s Metal Fingers stuttery snare production tic. Doom’s in high spirits too, goofing with the front row and the Sugar Club’s tiny dancefloor, declaring, “Wooah this is intimate,” as Big Benn pretends to stage dive even though he’s the size of a house. He’s taking cardboard sign requests too, dropping Operation Doomsday early on for “my little cousin in the front row”.

Aside from his patchy live reputation and infamous lazy-ass skulduggery, it’s often said that Doom’s music doesn’t translate to the stage anyway, that his bamboozling surreal wordplay and space funk loops serve insular headphone listening as you consult rapgenius.com to help decipher the coded metaphors. His live delivery has been ramped up though, as monotone monologues on his lyrical prowess become chest-beating proclamations as he circles the stage. He even does a half-minute vaudeville tap-dance routine, hunkering down like a daft uncle at a wedding until he’s out of breath.

Fact fans: the show is 10 years to the day since the release of Madvillainy, Doom’s collaboration with producer Madlib, the instant classic whose pedestal only gets bigger as we wait for the long-promised follow-up. After 20-odd years in the game, the first Madvillain project will be Doom’s calling card until the sequel drops, and when Big Benn cues up Accordian, Curls and Meat Grinder there’s the hint of a goosebump as the free association rhymes are hurled back at him from the faithful.

It has all the trappings of a classic – a packed club on a Sunday giving the finger to Monday morning, Doom working the crowd like a jackass, the eerie video loop of his masked face eyeballing the crowd on the big screen behind him, taking requests, rapping over randomly cued beats, perpetually fist-bumping and spraying drinks around. He’s doing enough to justify the adulation towards one of hip-hop’s true cult heroes. The thing is, he does just about enough. After an hour he’s making his way to the side door, trailing off on Rhinestone Cowboy as Kwake takes the slack with a snare workout.

It’s naïve, bordering on absurd to complain that a rap gig is too short, but the crowd would kill for more – some King Geedorah, some Viktor Vaughan, more from Born Like This, anything plucked from Doom’s hundreds of tracks. Give us an extra half hour on stage instead of a promise to meet at the merch table in 20 minutes. There’s a villainous cartoon cackle in the air and you know Doom will always get one over on us, but what a hero while we had him in our sights.

Originally appeared in State. Photos by Emma Rooney for State.