SUMMER HOOTENANNY WEEKENDER, Pacino’s, Dublin, tonight-Sunday.
Pacino’s is the smallest venue claiming to be running a three-day festival, when it’s really just a glorified weekend session, one step up from a rollover in your mate’s gaff. But with 30 acts over three days on three stages there’s plenty to see, and it’s so small that you’ll have a pile of new mates by the time they’re kicking you out on Sunday night.
Make a point to see Derry man The Cyclist (left) throw down his hissy, throbbing techno, Dublin duo Clu’s fluid elctronica and Adeyhawke’s swirly synthwave cuts.

MAEVE SHOWCASE IRELAND, District 8, Dublin, tomorrow
Tomorrow’s Maeve Records showcase is a techno home run of sorts. The label is based in Berlin, but it’s run by Greystones DJs Mano Le Tough and The Drifter, along with Dutchman Baikal, who’ll all be playing proper two-hour sets after the Tivoli opens at 2pm.
There’ll also be a live set from David Kitt and his alter-ego New Jackson, and three hours from John Talabot (right), who’s notching up more Irish gigs on his loyalty card than Nile Rodgers. He’s probably on daft.ie right now, planning his permanent move from Barcelona.
Once it hits 1am there’s a five-way back 2 back send-off to kick the party well into Sunday.

PEVERELIST + KOWTON, Bunatee, Belfast, tomorrow
With one of Peverelist’s trademark tracks a 12-inch called Dance til the Police Come, you know what you’re getting yourself into here.
The Bristol producer has always hung around the more refined outskirts of dubstep and its offshoots, avoiding the chundering spiral to the bottom, one up on the rung from nu-metal on the numbskull scale.
For the last six years or so, Peverelist has been skirting between techno, jungle and bass music’s outer limits, with intricate production and a skittery nervy edge.
Kowton’s brand of techno is equally in thrall to cavernous space and grit, so it’ll get pretty intense in the Bunatee basement.

DAVID KITT, Spirit Store, Dundalk, Sunday and Roisin Dubh, Galway, Thursday
Kitt has a sensible little afternoon slot at the Maeve Showcase tomorrow, so hopefully he doesn’t lose the run of himself and go on the rollover with his new techno peers and skip Dundalk.
One of Ireland’s great unassuming singer-songwriters who didn’t get get lost in a fog of earnestness, his electronic experiments in recent years should offer up a few new takes on old favourites and a few different avenues on the guitar.

UB40, Falls Park, Belfast, Sunday, SOLD OUT
If you’re a hardcore fan of UB40 your head will be wrecked these days trying to keep up with their nonsense feud. The way things stand at the minute there are two UB40s on tour – one with original singer Ali Campbell, trumpeter Micky Virtue and MC Astro, and the other one is, well, just the other bunch of lads.
The other lads played in Tyrone a few weeks ago, and both acts have played Ireland a few times this year, so it’s a bit of a lucky dip if you don’t do your homework.
Thankfully it’s the good guys playing in Belfast on Sunday, so you’ll properly be able to put the proper face to the songs, while Falls Park just turns into a big pop-reggae karaoke session. 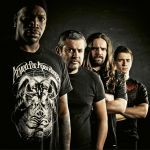 SEPUTURA, Academy, Dublin, Monday
Compared with UB40’s handbags, there’s a proper vicious schism within Brazilian metal legends Sepultura – with fans largely split into the hardcore thrash faithful loyal to Max Cavalera and the ‘newbies’, even if Max left in 1996. With Max’s brother Igor leaving in 2006 there’s a proper line drawn under the old gang getting back together, but if you avoid the soap opera and the bitching, there’s still plenty to love about the Derrick Green era.
Closer to the low-slung Roots album than the earlier death metal classics, latter day records like Kairos and The Mediator Between Head and Hands Must Be the Heart have their moments. But let’s be honest here, it’s Arise, Refuse Resist and Territory that get the blood boiling.