JOHN GRANT, Vicar Street, Dublin, Monday & Tuesday
It’s hard to think of any other artist with a higher approval rating in Ireland than John Grant.
The Colorado singer-songwriter got his latest gold star when he filled in for Sinead O’Connor at the Galway Arts Festival, and he was a sundown highlight at last year’s Body & Soul.
His third album Grey Tickles, Black Pressure is already in the bag as an album of the year — another collection of twisted funk, electronic pop and leftfield ballads. 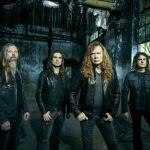 MEGADETH, 3Arena, Dublin, Monday
Megadeth have always been seen as the little brothers of the ‘Big Four’ 80s thrash legends, with Slayer, Metallica and Anthrax towering over them in heaviness and critical clout.
But iconic riffs like Symphony of Destruction and Peace Sells are still part of metal’s stone tablet lineage, and these hall of famers are still snarling.
New album features Chris Addler of support act Lamb of God, and he’s also been playing live with Megadeth. Surely he’s not double-jobbing on Monday?
Death metallers Children of Bodom are the other special guests.

JOEY BADA$$, The Academy, Dublin, Tuesday
After his drizzly evening show at Forbidden Fruit in the summer, Brooklyn rapper Joey Bada$$ is back in Dublin to catch you full-on up close.
With his gruff drawl, boom-bap beats and dusty, twisted soul samples he’s a descendent of Wu-Tang over the gleaming synths and trap of many other young MCs, with 95 Til Infinity up there with the great hip-hop calling cards.