Ministry is the band that just won’t die. For starters, ringleader Al Jourgensen has bounced back from being declared dead three times from drug overdoses, and he starts his sick fuck memoir The Lost Gospels According to Al Jourgensen with an anecdote of bleeding from every orifice. That’s every single one, including the worst one.

They’ve also gone through plenty of farewell gigs — I went to three ‘C U LaTour’ gigs in a week in 2008 (One in Serbia, two in Dublin). The industrial metal machine got another jolt in 2012 from the DeFiBriLlaTour (Al loves a pun), then flatlined again with the death of guitarist Mike Scaccia that Christmas. But after a filthy robo-thrash solo album as Surgical Meth Machine in 2016, Jourgensen started grinding the Ministry gears back this year with the album AmeiriKKKant, a not very subtle pot-shot at Trump, in the same mould as the Bush trilogy from the 2000s. 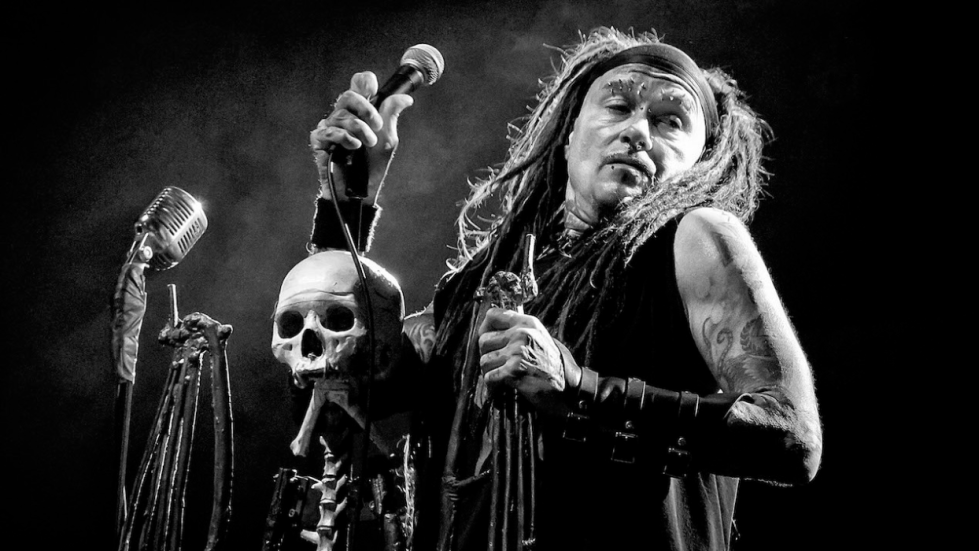 So it seems Ministry is back, this time for good, or at least until Uncle Al actually dies for longer than a few minutes — there’s probably not a fourth time lucky.

Maybe bar GG Allin, Jourgensen could well be the biggest psychopath in music, and he’s been the black heart of Ministry since 1981. He hasn’t always been a dreadlocked, face-studded warlock with actual fangs — and could’ve easily slotted into Depeche Mode in the early 80s around the time of Ministry’s synthpop debut, With Sympathy.

Jourgensen has since denounced With Sympathy as nampy-pamby pop (you shouldn’t), and even when the Quietus asked him to rate all Ministry’s albums from best to worst he left it out, while still including 2003’s Animositosomnia in last place – an album recorded in perpetual heroin cold turkey vomits.

The Ministry cogs started whirring properly in 1986 on the LP Twitch, with its dark New Beat synth and EBM backbone, and hints of Front 242 and Nitzer Ebb. 1988-92 is Ministry’s most revered period – The Land of Rape and Honey, The Mind Is a Terrible Thing To Taste and Psalm 69 is one of the greatest three-LP runs in all of heavy music. And the 1990 live home video In Case You Didn’t Feel Like Showing Up is straight-up frightening in its intensity.

The piledriving triptych has all the Ministry markers – rigid electronic drums, paranoid vocal samples, sick humour, processed guitar daggers and Al’s voice filtered through countless evil prisms, from satanic death metal growls to new wave Brit, sneery Southern cowboy drawl and general drugged-up bad egg. Before my Psalm 69 epiphany I thought Metallica and AC/DC were heavy, so it was also my teenage gateway drug to extreme music and later techno — give me a drum machine over a human any day, still.

Filth Pig from 1996 is the most underrated album in the Ministry universe, even if it’s maybe the most wretched, putrid album of the 90s. It’s Ministry’s most ‘rock’ album, but remember everything’s relative here. In the year of Jagged Little Pill, What’s the Story (Morning Glory) and Everything Must Go, Filth Pig stands out like a sore thumb that’s been injected full of bad smack. Slowed down to a stupor, it’s got Jourgensen’s most twisted, snaking riffs, the evil harmonica he perfected on Scarecrow on Psalm 69, and a brilliantly sacrilegious cover of Dylan’s Lay Lady Lay. It’s a bit of a dick move to shrug off the next 20 years, but while it hasn’t exactly been all downhill, Ministry turned into a straight-up industrial thrash band with some amazing outliers — 2007’s The Last Sucker touches on Psalm 69 levels of rage, especially on the opener Let’s Go. AmeriKKKant has some flashes of industrial venom — Twilight Zone is straight out of the Filth Pig play book and and We’re Tired of It has that Thieves thrash backbone.

But the diehards at gigs these days will always be shifting in the back row for the first hour, waiting for the final third and hall of fame tracks like NWO, Just One Fix and So What, to really crawl into the darkest corners of Al Jourgensen’s psycho brain.