Ah, the 80s – a simpler time for gender politics, when the most popular comedian on the planet was Eddie Murphy, doing his routine about gold-diggers, and on the big screen the most aspirational figure for girls was Julia Roberts’ hooker with a heart of gold who gets rescued by her corporate Prince Charming.

In this cultural climate of gaudy consumerism, Oran “Juice” Jones was as smooth as they came, and ‘Walking in the Rain’ – his paean to heartbreak at the hands of a two-timing, parasitical woman / ode to jealous boyfriend stalking tactics – chimes a congruent bell in the glitzy milieu of 80s pop.

Oran Juice, with an air of Eddie Murphy as Billy Ray in Trading Places, walks a forlorn, neon-lit sound stage, pulling the collar of his trench coat up against the elements, occasionally peering out from darkened alcoves at his sweetheart walking in the rain, holding hands with “Him”. As he follows them down the street, heartbroken, he clenches his fists and mournfully intones: “I’ll never be the same”. Cue the denouement.

Back in Oran’s apartment he sweetly welcomes his lady home and asks her how her day was and tells her he’s got some hot chocolate on the stove, before confronting her with the fact that he’d missed her so much he followed her (we’ve all done that obviously) and that she is “cold busted”. 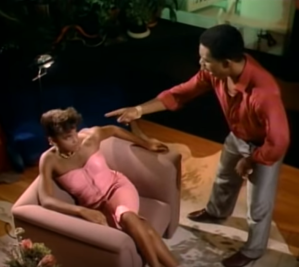 What then follows is a hilarious rant of righteous, street-smart indignation. Oran –psychotically – tells her his first impulse was to come up behind her and her lover with his pistol and “do a Rambo”, but because he didn’t want to ruin his thirty-seven hundred dollar lynx coat (lynxes are bloody pests anyway), he mercifully decided instead to cancel all her credit cards and repossess her expensive clothes and jewellery. I mean, what was she thinking: “You’s with the Juice… I gave you silk suits, Gucci handbags, blue diamonds… I gave you things you couldn’t even pronounce”.

This monologue all happens around a killer track – a slickly produced, ear-wormy slice of boogie-era street soul in the same vein as Luther Vandross, Colonel Abrahams or Alexander O’Neill, wrapped up in an incel fantasy. 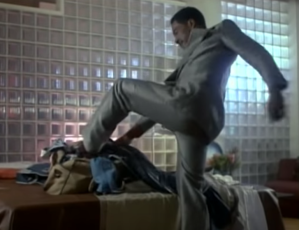 The Juice finally kicks her ass onto the street where he found her, suggesting she go hang with that “alley-cat-coat wearin’, Hush Puppy shoe-wearin’ crumb cake” she’s been messing with. She leaves his penthouse apartment with a shoulder bag full of the possessions she came with – in one gold moment the Juice stamps her crumpled clothes into the bag with pure venom.

Mercifully again, he’s just taught her a valuable lesson about relationships while she’s still young, but there’s still no saving this one: “You is dismissed!” You tell her, Oran.

Pissed off about the new Gillette ad? Get this on loop and relive a simpler time when ladies were gold-diggers and alphas were like the Juice.