In an interview in 2017 just before the release of Mango x Mathman’s debut EP Wheel Up, MC Mango told me: “Grime music isn’t alien in Ireland anymore.”

He’d been considering the growing acceptance of wider hip-hop culture in Ireland, with younger acts punching up through the underground, when they’d have been shrugged off the stage for their Irish accents a few years beforehand.

And while the three-storey mural of Stormzy in Smithfield was eventually pointed over, Irish-based hip-hop, grime, R&B and drill has been surging in the last few years at a rate that would make Sinn Fein spin.

Karl ‘Mango’ Mangan and producer Adam ‘Mathman’ Fogarty released their debut album Casual Work at the tail end of 2019 on the back of years of tops-aff festival shows, grime shutdowns backed by a ruthless rave weapons bag.

Crucially, though, the pair also had an open door crossover policy, with live collaborations on high-profile live presentations such as the Story of Hip-Hop at Electric Picnic with the RTE Concert Orchestra, presenting the classics with rappers and singers such as Jafaris, Jess Kav and Erica Cody. They also teamed up with Paul Noonan, Lisa Hannigan, Loah, Crash Ensemble and more, for the Imagining Ireland showcase at the National Concert Hall and London’s Barbican. 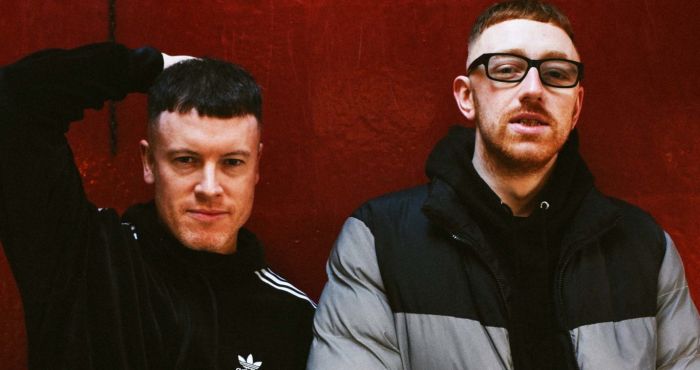 This openness seemed to feed into Casual Work — a state of the nation address through Mango’s introspective and disaffected bars and spoken word interludes. The rave bangers are still fully loaded, but they’re offset by pristine neo-soul, R&B, ambient textures and avant-garde string arrangements on other tracks. It’s a singular Irish album that bottled the collective mood of the country, and the poster for their No Surrender night at the Bernard Shaw — with burning hotels and upturned Garda cars — went the extra seditionist mile.

Despite countless festival and club shows, this is their first tour, which kicked off in Galway’s Rosin Dubh last night, with gigs in Limerick and Cork this weekend, and a sold-out homecoming victory lap in Dublin’s 39/40 at the end of the month.

“Casual Work is only out a couple of months now, but the response so far has been incredible. We’re just really happy that the music has connected with people in a real way… it means a lot to us,” Mathman told me. “Anyone that has a ticket to any of the shows should be prepared for the gulliest, tops-off rave that only MXM can bring.”