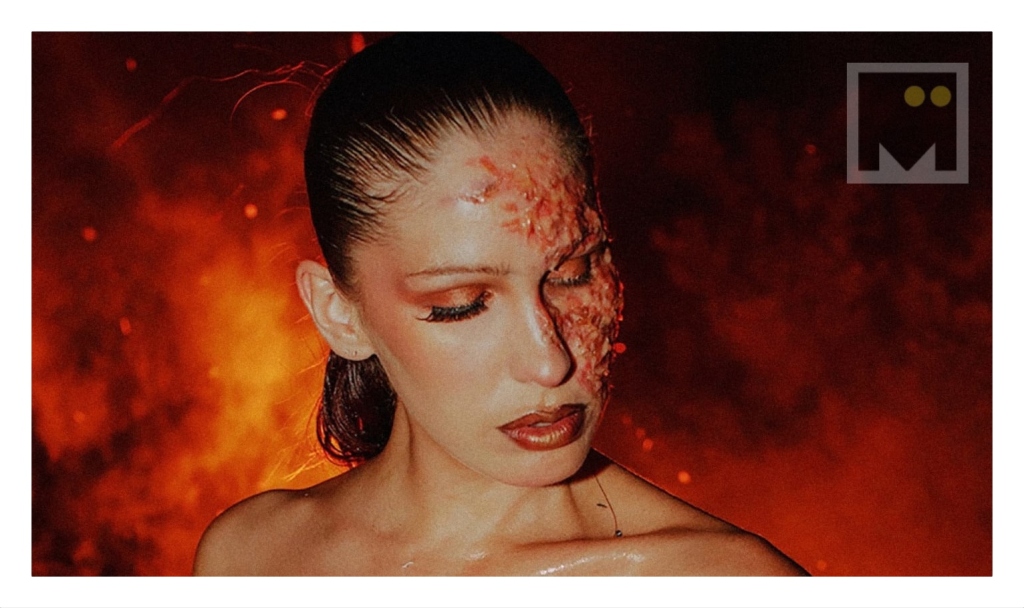 So, any news? Anything happen in the last week or so? A soundtrack to last month — spraying air freshener over the pungent shite smell left by Lockdown 2, election hysteria, and the return of Br**it to the news.

A few years ago I had an hour-long chat with Detroit techno legend Robert Hood and he seemed content and at peace — gushing with dad energy about his daughter Lyric and their developing musical relationship as Floorplan, his time in Underground Resistance and breaking down racial barriers with music. He even left me an indelible image of him in his daily routine praying to God in a tractor on his ranch in his adopted home of Alabama.

But the former Minister of Information of the fiercely militant UR knows when to speak out, and ‘The Struggle’ is a minimalist techno rager, with a speech by activist Tamika Mallory from Minneapolis after George Floyd’s death, preaching “enough is enough” through fiery 303 righteousness.

Serbian DJ and producer and DJ Masha sprinkles some dark cold wave techno grubbiness all over her submission to this brilliant compilation by LA-based radio and event promoters Sisters of Sound. It’s a true international venture, and she joins artists from the UK, US, Spain, Japan, Slovenia, Portugal, Germany and Canada, and all proceeds go to three charities: Transgender Law Center, Downtown Women’s Center and Women’s Refugee Commission.

Listening to John Frusciante’s oddball lo-fi pop and noise experiments for years, as well as his more recent deep house detour as Trickfinger, I just can’t figure out what the fuck he’s doing in Red Hot Chili Peppers. Well, beyond the obvious of course. Maya is a new venture with an old theme — early rave and hardcore with nods to first-generation Aphex Twin. Genuinely great stuff from one of rock’s great conundrums.

There’s been plenty made of Autechre’s radical move of releasing an album with a conventional structure, and melodies wafting through the algorithms. Hang on though, the pair haven’t gone all Spotify gym playlist on us, SIGN is still full of intricate electronic puzzles that keep you guessing — you’ll just get there quicker. And with droney, beatless melancholy of ‘Metaz form8’, you’re inside it right away.

After a load of singles and stand-out features I’m waiting not so patiently for a debut album from Shygirl, the MC, singer, DJ and one quarter of radical London club collective NUXXE. She’s even got her own 14-song Spotify playlist called Totally Shygirl that doesn’t even have her most recent tracks. Her upcoming EP ALIAS is told through four different alter-egos, each with their own digital avatar. ‘SLIME’ is produced by SOPHIE, Jai Whitson and Sega Bodega, and the video features Arca among others, so she’s in deep with some of electronic music’s leading future-thinkers, and her pristine robo flow is as striking as ever.

CLIPPING — Check the Lock (Visions of Bodies Being Burned)

Visions of Bodies Being Burned is Clipping’s sequel to 2019’s horrorcore-themed There Existed an Addiction to Blood. The LA hip-hop act double down on the blood and guts and add even more gory details, with Foley sound effects and video nasty synth interludes that would have the Elm Street kids skulling down triple espressos. ‘Check the Lock’ is a late-night trawl through a fading gang-banger’s paranoid daily routine — checking locks, concealing guns and knocking back Xanax.

NEALO — Xanax (All the Leaves are Falling)

“Everybody’s got some books that they’re meant to be reading,” offers up Dublin MC Nealo on this debut LP highlight. There’s a scattered train of thought running through ‘Xanax’, of left-aside to-do lists, long-lost J1 piss-ups in San Francisco, panic attacks and fading friendships. But also the realisation that “I haven’t popped a Xanax since my son was born, I think I was only taking ’em cos my heart was sore”, through soulful spiritual jazz by the group Innrspace. The former hardcore frontman’s reassuring flow is more wise mate than lit sesh-head — I’d say we could all do a pint with somebody like Nealo these days.

The clue is in the name — ‘Mad Ting’ was the peak hardcore rave weapon on MxM’s 2019 debut album Casual Work, that would’ve been their tops-aff petrol bomb all through 2020 festival season. The pair are marking the first birthday of the album with a six-track remix EP, just to keep ruffneck grime, hip-hop and drum & bass in the back of your mind while you wait for this vaccine. SertOne takes the rave stabs and adds more sonic density and Bug-style dub menace. I once told Mango in an interview that he was a cross between Ronnie Drew and Flowdan and he took it well (“I’ll fuckin take that!”), and his pitched-down bars near the ended of this remix puts him even further in that territory.

Not to lean too much into a cheap metaphor that’s just hanging there, Estonian avant-pop artist Mart Avi’s latest release Feather feels a lot lighter than the hyper-kinetic tech-noir single ‘Spark’ he released at the start of lockdown. Feather is a delicately wafting piece of intricate ambient pop, sprinkled with ASMR electronic fractal effects. There’s a nice Drexciya-goes-vaporwave vive about the self-directed video too.

New York artist Alexandra Drewchin follows up her more regular off-grid electronic collage work with a new album that goes more acoustic, with harp, strings and acoustic guitar making a prominent entry. She hasn’t gone ‘folk’ though (maybe some of Angels of Light’s most psychedelic left turns might be a nod), but the delicate arrangements are woven through purring electronic effects and her supernatural vocal harmonies and overdubs. ‘Faith Consuming Hope’ is the epic curtain-closer.

MARY LATTIMORE — Til a Mermaid Drags You Under (Silver Ladders LP)

And the most evocative song title of the month goes to…

Let’s be honest, the harp is already a pretty magical instrument, but to this uneducated lay person, Mary Lattimore is opening up new portals with her harp and synth explorations. She’s joined on this album by Slowdive guitarist Neil Halstead, and between their acoustic instruments and the electronic treatments, they’ve created an ebbing, flowing serene master-work that’s teeming with vitality. Take it all in, but this 10-minute passage is a shimmering highlight.

New label Remote Town Records has narrowed its base by releasing music “exclusively by artists from Co Wicklow”. Its logo is a quaint little thatched cottage but this is no crackling open fire trad session. The first release is EPW-01 by electronic producer Damien Lynch aka Diamond Dagger, who got inspired by leaving his studio in Wicklow hills to “roam, wander and intertwine with his local surroundings”. The title ‘Poachers Path’ evokes images of late-night damp leaves and muddy boots, offset by mid-tempo techno menace.

Lockdown cruelly started for Mount Alaska with a cancelled concert at Dublin’s Pepper Canister Church for the St Patrick’s Festival, so they missed out on an intimate audio-visual presentation of their stunning debut album Wave Atlas: Season One. Still, ‘Undulate’ further explores the neoclassical piano and ambient electronic murmurs on the debut, and feels like a bit of a much-needed comfort blanket.

I’ve been a Bruce lifer ever since my ma bought me the Born in the USA tape for my 7th birthday and helped me wear the tape out over years. A lifetime of dog-eared vinyls, double figure gigs and indoctrination of family members later, and Letter To You has got me more Bruced up than I’ve been for decades about an album. It’s the first record he’s recorded live with the E Street Band since 1984’s Born in the USA, and that “testifyin’, death-defyin’” energy and vigour is all over it.

‘Burnin’ Train’ is a big one-twoooo-threeee-faawh goosebump rock’n’roll anthem in the vein of ‘No Surrender’, and couldn’t have come at a better time for Bruce fans stuck in this shit-heap of a second lockdown.

Toronto noise-rock act Metz are in the same blistering bad vibes ball park as Uniform or Shellac, but not quite as feral as their Jesus Lizard grandaddies. ‘Pulse’ is a brilliant, writhing headbutt of an opener, with off-the wall discord and some truly unsettling kickdrums. If you know the ‘bit’ in Hereditary, it sounds like that.

Belgian avant-garde metal act Briqueville have a lot going on in their heads, behind the gold masks and black robes, and some of it will give you the fear. Among the post-metal passages, droney electronics and psychedelia elsewhere the epic 14-minute ‘Akte X’ builds from a proggy, nervy interlude into a sludgy volcano in the final act.

Not sure how many times I’ll listen to this, and you’re fucked if you stick it on at a party, but I can get behind this absurdist performance art piece. The ‘album’ is 12 separate recordings of verlaak and Ingamells wrapping rolls of tape around each other then frantically trying to break free — with their panting breath and rubber sole squeaks the only respite from the harsh tape sound.