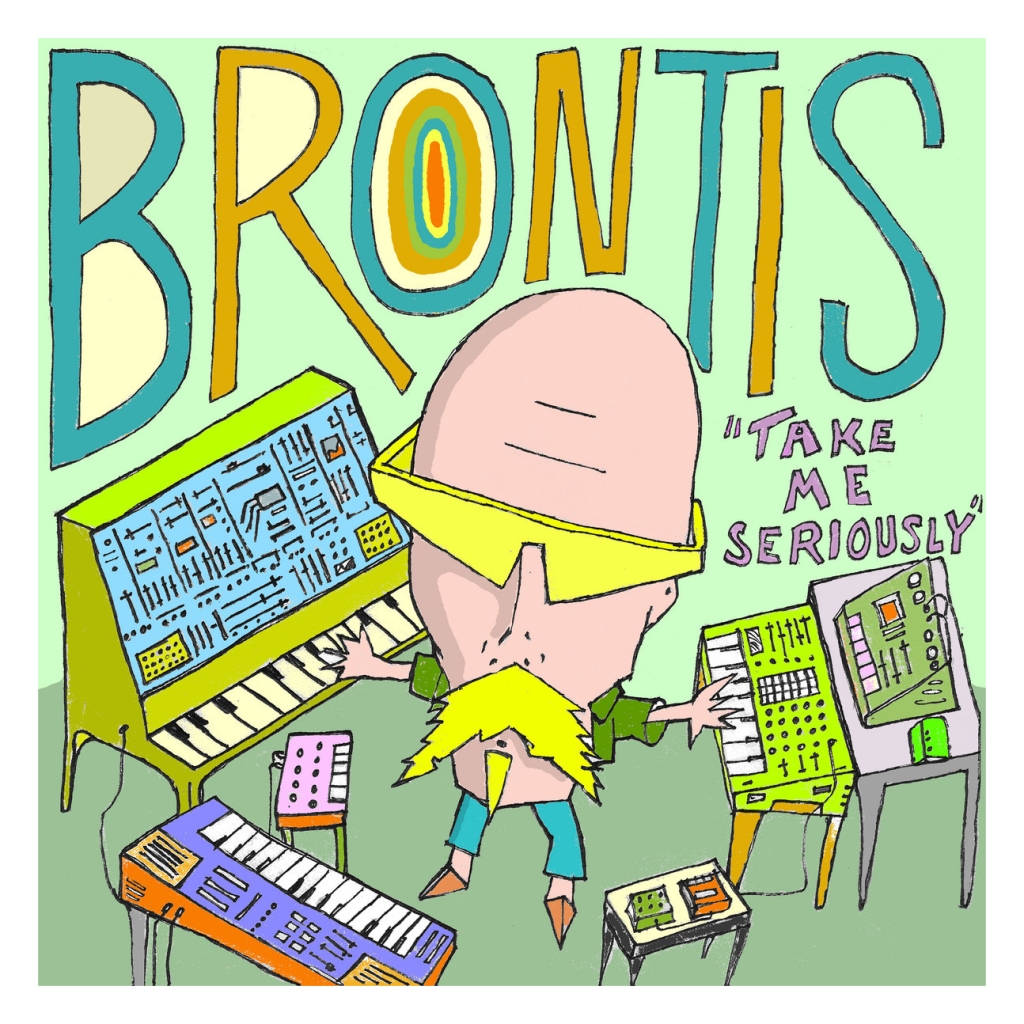 Brontis’s new album opens with a track called ‘Sparse Audience’, which isn’t some resigned comment on the last year without live music, but there’s a story behind it. A big story too — it’s a scene-setter for his new sci-fi surrealist comic, with the album Take Me Seriously a soundtrack that’s unlocked with a handwritten download code on page 1.

By some meta twist, Brontis himself appears in the comic playing the Take Me Seriously tunes live in a shopping mall, hiding behind analogue synths playing “cod techno, eventually enveloped in a swamp of detuned unease”, much to the apathy of the above-mentioned sparse audience. Track titles are embedded throughout the comic, so in one scene two stragglers spill out of a ‘Popular Frozen Food Chain’ to the sound of mid-tempo nervy acid, and so on.

Our “bald synthesist” is soon dragged into his hero’s quest, with an invasion of two body-snatchers, an alien abduction and a mission on their planet to stop a marauding extraterrestrial species of Mitsubishi-fuelled rave monsters — basically a giant foot with a Cyclops, head and a huge nostrils, “raw and angry, hoovering up drugs by the pallet”. Can Brontis come up with a lighthearted, ironic bit of electronic fluff to stop the mad-fer-it drug-bin Feet ravers trampling his new adopted planet into dust? Or can he only write bangers, making it worse?

The self-effacing central conceit here is Brontis noting his playful side — an ironic left-turn from revered sci-fi techno conceptualists like Jeff Mills. But the comic’s B-movie vibe is an alien smokescreen for the pretty Serious soundtrack. Come for the bold illustrations and scenester in-jokes, stay for the Drexcian electro, hi-BPM intergalactic techno, freak-jazz moments and the odd hardcore Mentasm synth stab. And I’m picking up Brad Fiedel Terminator vibes off ‘We’re Borrowing You’, with its four-stab bassline a ringer for the “Fuck you asshole” music. Kinda guessing Brontis won’t have any lame tech-house to stop the pilled-up Foot aliens dancing the world into the ground. May as well join them.

Take Me Seriously is out now on Boy Scout Audio — listen below, or buy the 7-inch x 7-inch comic on Bandcamp for £8, with all cash going to the Irish Network Against Racism (inar.ie).