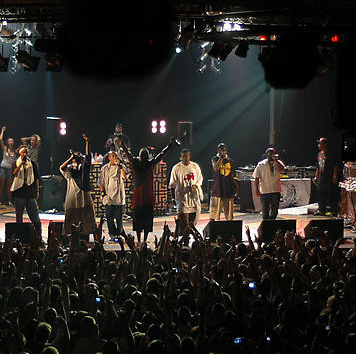 Wu-Tang Clan are an hour late and DJ Mathematics is playing the fucking Fugees. This is some shameless shit right here, to quote Method Man’s Cheese character in the Wire. Maybe the boos are too harsh, but he’s bound to know when he keeps shouting, “Wu-Tang’s ready” he’s causing a false alarm – a stampede as fans rush to the front or sprint mid-piss from the toilets with half-buckled belts and splashed jeans. Then again, it’s been a few years since the Staten Island posse formed like Voltron for a live show – what’s an extra hour?

It’s a frantic opening blitzkrieg – they roar out of the blocks with Protect Ya Neck, spitting venom, chucking beer cans, ping-ponging rhymes and dropping scattershot F-bombs, before GZA takes centre stage for Clan in Da Front, every bit the Genius. It looks like Wu-Tang Killa Beez really are on a swarm — especially when the iconic sample of “Shaolin shadowboxing…” fills the room and Bring Da Ruckus kicks in as the famous Wu-Tang phoenix logo fires up on a huge LED screen.

Wu-Tang have been masters of shock and awe since their 1993 debut album Enter the Wu-Tang (36 Chambers) napalmed their peers and sliced right through hip-hop conventions with Samurai-sharp rhymes, cavernous beats and a ready-made mythology that pitched nine New York gangbangers as martial arts warriors from the slums of Shaolin. The Brixton show wisely leans heavily towards 36 Chambers and its 1997 follow-up Wu-Tang Forever, but as the night wears on the Clan start to drop the intricate wordplay, cryptic similes and kung fu movie samples for a free-for-all shout-out that looks set to derail any minute. Classics like Da Mystery of Chessboxin and Reunited whizz by in a fuzz of overlapping lines and kick drums that sound like someone banging a wet cardboard box – the sound mix is pretty shabby (“weak, like clock radio speakers”). The bottles of champagne on stage don’t help either – the towering Triumph is aborted early when Inspectah Deck skulks off in a stupor after fluffing his lines. The few thousand Wu disciples in the crowd could’ve been his autocue – throughout the show lyrics are roared in unison with football terrace fervour, as thumbs are joined and held aloft in the ‘W’ sign.

GZA’s the saviour on a few occasions, hitting his lines with metronome precision on Liquid Swords then dragging the most out of his crew on 4th Chamber, the chilling standout on his Liquid Swords solo album. The most poignant moment arrives in a tribute to “fallen brother” Ol’ Dirty Bastard – the late cousin of RZA and GZA who died in 2004 after an accidental drug overdose. Brixton is awash with mobile phone beams and lighters during the sombre Can It Be All So Simple, before ODB’s true raucous spirit is evoked during the more apt Shimmy Shimmy Ya and pints are downed in one as thousands hail, “Baby I like it raw.” It’s a real joyous moment – a big hit in a show that has its fair share of misses. Wu-Tang rapping over the Beatles’ Come Together – recorded a few miles away in Abbey Road – should have been one of those transcendent live singalongs but the goodwill fizzles out when we realise they really are walking off after barely an hour.

A self-confessed Wu fanatic, before flying over to London I made a dumb joke that I’d be happy if the gig was just GZA rapping over a boombox, Stop Making Sense-style. At times in Brixton it felt this wish was almost granted.