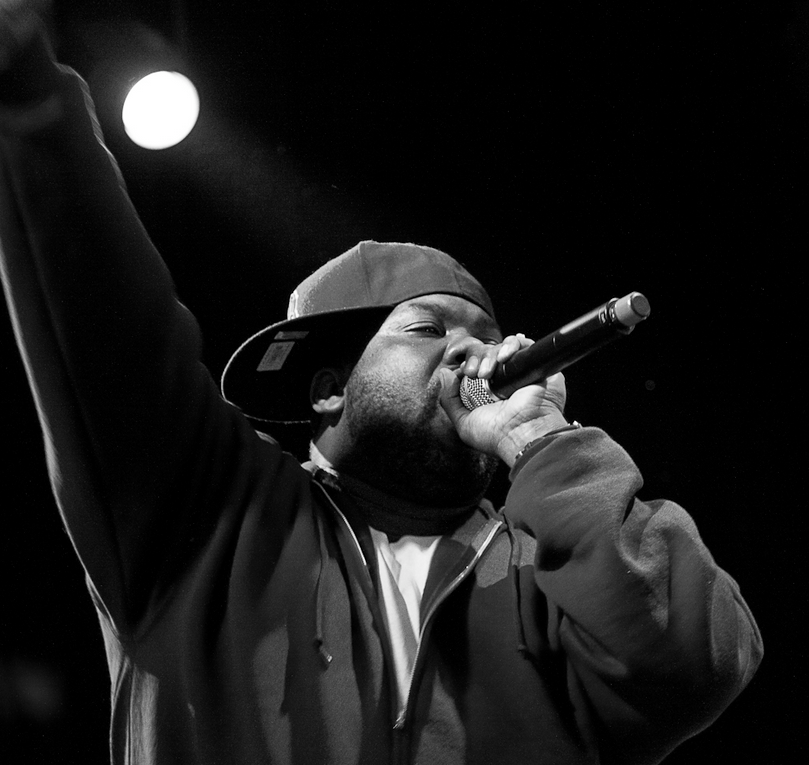 Raekwon couldn’t have picked a better time to bring the Wu-Tang Ruckus. It’s the night before Paddy’s Day, everyone’s on a booze blitz and scowly empty-handed touts are outside the Button Factory trying to score tickets. The place is hopping with anticipation – it’s billed as a run-through of Only Built 4 Cuban Linx, his revered 1995 debut solo album which took the blueprint of the Clan’s snarling 1993 debut Enter the Wu-Tang (36 Chambers) and splattered it with Scarface levels of gangsta excess.

The Chef is keeping us waiting but he’s in the wings, sending messages over the PA to the “true hip-hop fans”. So from behind the curtain he promises: “Yo yo I got my Patrick’s Day green drawers on Dublin – get me a green Guinness.” A few weary Wu disciples are restless – the Clan have a near 100% record of turning up late. We’re imagining a Wizard of Oz scenario behind the curtain – what if that’s just a recording? Is he in a stoned haze back at his hotel?

No such arsing around from support act Melodica Deathship, the Dublin-based hip-hop duo whose live show sounds like it was forged in a foundry – seismic industrial beats and cavernous dubby basslines from Deep Burial, and MC Exile Eye’s seafaring rhymes about pirates, shipwrecks and ghostly vessels on the high seas. They sail through most of their five-star album Doom Your Cities, Doom Your Towns, with the highlights being Black Ship Coming, the cannon fire on Bang Out and 1803 – their misty take on Bobby Sands’s coffin ship ballad Back Home in Derry. The nautical concept draws a parallel with Wu-Tang’s fixation on kung fu imagery and samples, and there’s a world of films, literature and ancient myths and legends for them to plunder for future voyages – we can’t wait to see where the Deathship docks next.

Anyway, back to Raekwon. DJ Symphony has been spinning old school hip-hop and the odd numbskull singalong like House of Pain’s Jump Around while The Chef gets ready. There’s also a lighter/mobile phone aloft moment when he drops the G-Funk classic Regulate for “fallen brother” Nate Dogg the day before. Flanked by two burly MCs, Raekwon bounds on at 11pm (early in Wu-Land) in a hail of Wu-Tang snippets, scattershot scratching and his 2009 single House of Flying Daggers. Straight up we know he’s not sticking to the script – we’ll have “some old shit, some new shit, some real Shaolin hip-hop and some Wu-Tang bangers”. The Chef must have cooked and ate all his own pies – those green drawers of his must be XXXXL – but it doesn’t stop him pogoing, grabbing the yellow Wu-Tang logo on his t-shirt like a patriotic World Cup goalscorer.

The set’s full of heavy-hitters from his near-20 year career, which works out better than a Cuban Linx playback after all. It’s mostly split between Cuban Linx, the 2009 sequel Only Built 4 Cuban Linx 2 and 36 Chambers, and he tears through the tracks, spitting verses, barely missing a rhyme. It’s a hip-hop hit rather than a miss, with Cuban Linx classics like Incarcerated Scarfaces, Criminology and Glaciers of Ice knocking heads with the sequel’s hardcore tracks Surgical Gloves and House of Flying Daggers – so good he plays it twice. There are plenty of thumbs-together Wu signs for Clan favourites C.R.E.A.M., Can It Be All So Simple and Protect Ya Neck as he asks the crowd to stamp all over that “pussy commercial shit”. He even sneaks in Ghostface’s first verse of GZA’s 4th Chamber from Liquid Swords and the first minute of the towering Triumph – but that’s interrupted by the DJ trying to flog merchandise (well it had to happen sooner or later).

He’s “drunk on the green Guinness” too so he’s full of the banter, praising the Irish for heroic drinking and dodging a few boos when he suggests maybe the Russians could take us on. OK maybe another time, but the Russians wouldn’t have a hope here. Raekwon hails glorious Saint Patrick for “taking all the snakes outta the muthafuckin’ hood”, and this causes such a roar that you know half the crowd are already planning a rollover party into Paddy’s Day, bringing the Ruckus all sides.