THE ORB, Limelight, Belfast, Tomorrow
It’s 25 years since The Orb rewired a movement strung out on 150bpm hardcore and warehouse raves, by adding ambient house to electronic music’s family tree.
Formed by Alex Patterson and Jimmy Cauty — who went on to form the KLF with Bill Drummond and produce the ambient masterpiece Chill Out — The Orb would be in anyone’s top 10 electronic pioneers.
Weaving prog, dub, electronic drones and cryptic samples, The Orb have created their own Ever Growing Pulsating singular sound.
New album on Kompact, Moonbuilding 2073 AD, is another sci-fi conceptual master-stroke, and even though Patterson and Thomas Fehlmann have swapped reel-toreel tape and samplers for laptops, expect a real immersive experience.

LAUREL HALO, Tengu bar, Dublin, Tomorrow
Fair play to Out To Lunch for once again turning a Japanese restaurant on the Quays into a showcase for electronic experimentation.
Laurel Halo heads up tomorrow’s event, with a live set that’ll be heavy on her fractally broken beats, shapeshifting techno and shadowy vocals.
Also on the bill they’ve got a DJ set from analogue synth fetishist Andras Fox and a late addition of NYC’s Aquarian, who’s due a DJ set of overdriven techno and high-BPM electro with a Drexciyan twist.

THE LEMONHEADS, Limelight 2, Belfast, Sunday, & The Academy, Dublin, Monday
If you’re on for a night of slacker grunge nostalgia, the grapevine tells us that Lemonheads are stuck in a 90s timewarp.
Without a new album to plug or any points to prove, there’s a risk Evan Dando and co will go through the motions — but he was never a live-wire performer anyway.
Chances are he’ll throw on a cardigan and strum through lo-fi cuts like It’s a Shame About Ray and Into Your Arms, but just don’t ask for Mrs Robinson.

‘WEIRD AL’ YANKOVIC, Vicar Street, Dublin, Tuesday, & Limelight, Belfast, Wednesday
Weird Al pulls off parody covers with the broadest of strokes, but he deserves a medal for persistence.
The Californian has been goofing around with comedy records since 1983, with memorable targets including Michael Jackson (Eat It, Fat), R Kelly (Trapped in the Drive­Thru), Madonna (Like A Surgeon) and more recently Pharrell with Tacky.
If you only go to see one guy this week singing comedy records while looking like a mash-up of Eric Idle and Frank from Shameless, make sure it’s Weird A 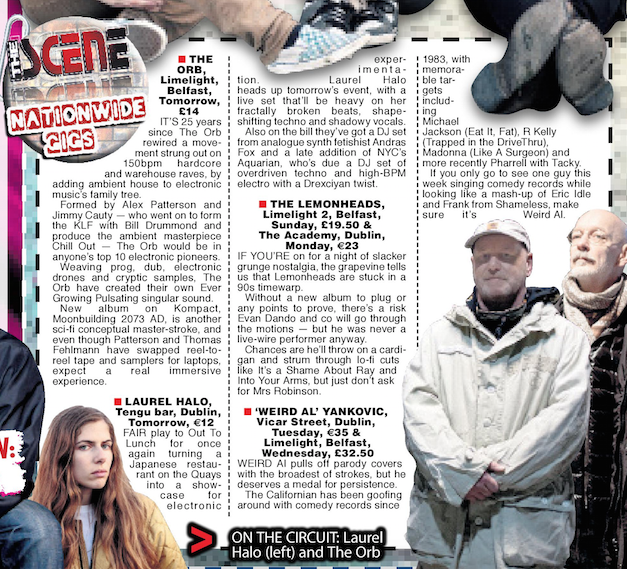