KID INK, Vicar St, Dublin Tuesday
LA rapper Kid Ink’s big- gest hit so far is a daft in da club banger that features Chris Brown and butchers Robyn S — but he’s not all bad.
A year on from selling out Vicar Street, he’s back to collect some more of that Money and the Power, with his 2014 major label debut My Own Lane still cashing out for him.
Despite his gang-banging image, Kid Ink is more sugary than recent featured guests like A$AP Ferg and Meek Mill. His team-ups with R Kelly and Usher are a better hint. 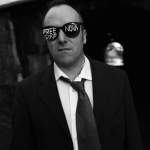 JINX LENNON, Hudson, Belfast, Tomorrow & Gallery Cafe, Gort, Galway, Sunday
With Sleaford Mods finally blowing up after eight years ranting to deaf ears, it’s surely time for Jinx Lennon to get his dues.
The Dundalk man may be a r m e d with a guitar and midi set-up instead of post-punk riffs on a laptop, but his surreal social commentary hits the target just as hard.
He’s working on his new LP Keep Sane in the World of Eager Smiling Pricks, so expect plenty of works in progress, as well as rants about welfare snitches, the wealth divide, “drug slugs” and random gobshites.

NIGHTMARES ON WAX Button factory, Dublin, Tonight, & Savoy, Cork, Tomorrow
For 25 years Nightmares on Wax has been the quiet man on the Warp Records label, keeping it slow and steady while the likes of Aphex Twin, Autechre and Boards of Canada get all the stalker fans.
George Evelyn is the longest-serving artist on Warp, with his downtempo hip-hop and dusty soul safe from every passing electronica fad.
He played a recent DJ set at Pygmalion in August, after a Main Stage show at Body & Soul, but this live set will be a proper soundsystem affair, with a drummer and Zero 7 vocalist Mozez and legendary reggae singer Ricky Ranking. Support is from Dublin DJ Arveene, who can veer between hip-hop, rare soul, house, disco and electro without a bother.

YO LA TENGO, National Concert Hall, Dublin
The last time I saw Yo La Tengo it was maybe the most impressive up yours I’ve seen at a festival — mid afternoon in splitting sun on Forbidden Fruit’s main stage, pulling off a 10-minute feedback freakout on Pass The Hatchet, I Think I’m Goodkind.
The refined NCH may seem like an odd fit for the veteran indie noise-pop act, but their new album Stuff Like That There is heavier on acoustic strumming.
Carrying on their tradition of dissecting pop classics, the new LP nods to 1990’s Fakebook as another cover album. They include The Cure’s Friday I’m In Love and tracks by The Parliaments and Hank Williams with a lightness and onetake spontaneity you’d see at their request-filled shows. The New Jersey trio are mostly doing covers on this tour, but expect a few toned-down reworks of their cult classics. 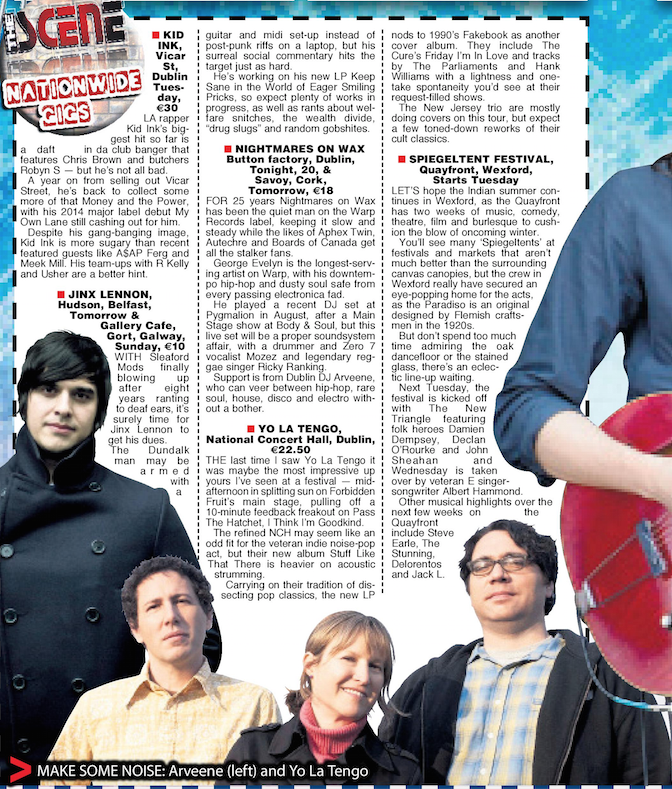