Girls Names have decided to call it quits. The full stop came with a post on Instagram, just 11 days shy of a decade since their first ever show. With that announcement ends a journey from raucous, joyous beginnings to a more reflective, perhaps world-weary end.

The Girls Names of 2019 was a very different thing to the Girls Names of 2009. Hastily formed as a duo purely to provide a support act to a Wavves show being put on by a friend just weeks later — with Cathal Cully on guitar and vocals and Neil Brogan on drums that he allegedly didn’t know how to play yet — it’s hard to square the haphazard nature of the Belfast band’s genesis with the acclaimed, complex and thrilling four-piece they ended up becoming. They released a handful of excellent EPs and four albums that saw them move from jangly surf-pop to indie-rock to post-punk to uncompromising gothy avant-rock, gaining and losing members along the way. And they spawned a number of side projects that splintered in various directions, some of which even threatened to outshine their parent band. 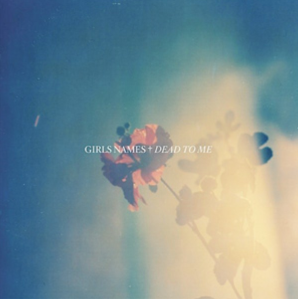 Listening back to those early Girls Names releases now, up to their still brilliant 2010 debut album Dead To Me (by which time Claire Miskimmin had been added on bass), they paint a picture of a band learning on the hop. Ideas are attempted, high targets are aimed for and often far exceeded but sometimes missed. There’s often a ramshackle feel to the instrumentation, but Cully’s deep baritone seemed to come fully formed and set the band apart from the surf rock styles of those likeminded buzz bands of that time. Tracks such as ‘Graveyard’, ‘Kiss Goodbye’ and ‘Bury Me’ retain a magical, charming quality that has not dimmed over the past decade.

And yet Cully said later that Dead To Me was given its name because, to his mind, the album had taken so long to be released that he had already outgrown the songs and wanted to leave them all behind. It was to become a theme in the band’s lifetime — a seemingly recurrent fatalism that spoke of a profound dissatisfaction with what had gone before and a sense that what was happening now and what lay ahead was far superior. By the time they were touring ahead of their second album The New Life, songs from Dead To Me and the early EPs were all but abandoned in their setlists. But then perhaps there was some black humour to that seemingly morose exterior — after all, this was a band that, when asked to provide a companion song for a double A-side single featuring the track ‘You Win’ by San Francisco band Brilliant Colors, decided to call their song ‘I Lose’. As it happens, the Girls Names track was far superior.

It was on 2013’s The New Life that the future sound of Girls Names became clearer, with the earworm title track — the album’s lead single — a sharp shift in direction into precise, motorik territory and the first real evidence of what a ridiculously strong bassist they had in Miskimmin. The album also marked the first appearance of guitarist and keyboardist Philip Quinn, then of the band Charles Hurts, on a couple of the tracks. The founding duo would soon split however, with Brogan leaving to concentrate on his own project — as frontman to the band Sea Pinks, who have now released seven excellent and underrated albums of the type of guitar music that Girls Names might have made had they followed the logical path forged on Dead To Me. Up to that point, the band’s songs were all credited solely to Cully. Brogan would follow his own creative and fertile muse elsewhere.

On album number three, 2015’s Arms Around A Vision, Girls Names embraced a new drummer in Gib Cassidy (formerly of Logikparty) and a far more dissonant and left-field sound, announced from the get-go with album opener ‘Reticence’. It was another move away from their previous guise, darker again and more impenetrable, while Cully adopted a new drawling delivery to his vocals that added a sense of unpredictable volatility, of strutting to avoid stumbling to the verge of collapse.

In the three years that followed, however, a disillusionment set in. Touring and releasing music was not the financially stable career route it once might have been. Cassidy left the group and side projects such as Miskimmin’s New Pagans and Belfast/Dublin supergroup Cruising, Quinn’s Gross Net and Cully’s Group Zero became more of a focus. A fourth Girls Names album was started and then discarded as funds dried up and the uncertainty of working full-time on their own music became too much.

After some cajoling and time away from the band, that aborted fourth album would be torn apart and reassembled into the magnificent 35-minute Stains On Silence — one of Moo Kid Music’s best albums of 2018. The record was unrecognisable from the band responsible for those early releases at the turn of the decade. Layered and multifaceted, dark and often difficult, Stains On Silence is a work that stands apart from those by Girls Names’ peers, if they have any left. The lyrics speak of unknowable horrors and the torments of life over a queasy brand of art-rock. It’s not a gentle listen.

During what would turn out to be their final show in Dublin last July, it seemed Girls Names had finally coalesced into a properly powerful and confident live outfit. With Sarah Grimes of September Girls taking over on drums, the rhythm section became the central focus on stage, allowing the band to do the songs from Arms Around A Vision justice in a way they hadn’t quite managed before and to bring Stains On Silence to life. It was an exciting and vital show, one that exuded huge optimism.

At the end of their European tour in November, the band wrote on Instagram of their happiness with the shows they had played and of how grateful they were to be back on the road, but added, ominously, “I’d love to say we’ll do it all again soon, but it could possibly be another stretch in time.” Now it looks like that may be far more than just a stretch.

From the start, Girls Names never stood still. Their restlessness led them to record some of the most interesting and imaginative music to come out of this island in recent times. Where they might have gone was a tantalising thought, but then all farewells should be sudden. They went out on top.

And they’ll be missed.

That's the start of it all 10 years ago in Lavery's Bunker 10th February 2009. So after a whole decade we've decided to call time on the band. . It's been some journey from absolutely nothing – literally absolutely nothing, no clue but naïvety, ignorance and some youthful idealism. But ten years is a long time to be neither here nor there. Thank you from the bottom of our hearts to everyone who's helped along the way and been part of it all – everyone who ever came to see us, bought a record, bought a tee, bought us dinner, reviewed us for good or bad, sold our records, booked us shows, gave us a bed for the night, danced with us, laughed with us and cried with us. Too many to mention but we've tagged some special key players. Keep an eye out for Claire's @bloodied_up and Phil's @qliph future endeavours with @newpagans and @gross_net happening this year. Logging out of this account from this evening so unfortunately there'll be no more correspondences. If you know us, you know how to get us. Thank you so much X