“A master musician demands attention,” says Dublin poet and artist Larry Burns in the intro to a brilliant new RTE Lyric FM documentary about the life and work of his late friend Michael O’Shea.

O’Shea was a street musician who weaved mystical Irish trad through psychedelia, proto-electronica and Middle Eastern and Asian forms, picked up on his endless travels. His singular sound was created on a self-made instrument he called Mo Chara (My Friend), an inspired take on a hammered dulcimer, a sitar and a zelochord, crafted from half a door he pulled from a skip in Munich, along with 17 strings and various electronic phasers and echo effects.

Before its release earlier this year on Dublin label All City Records’ reissue wing Allchival, O’Shea’s self-titled debut (and only) album had a near-mythical, cult-like status among DJs, Irish music historians and curious crate diggers, since its initial pressing in 1982 and its long-deleted 2001 CD reissue.

The original record was released on Dome Records, run by Graham Lewis and Bruce Gilbert of Wire, and speaking to Moo Kid for a feature earlier this year, Lewis backs up Larry Burns’ ruling on master musicians, vividly recalling the first time he heard — and saw — Michael playing Mo Chara on a Covent Garden street in 1980. Transfixed by the “beautiful noise emanating from down the street”, he grabbed Gilbert from the pub to “ratify the vision” and they gave O’Shea an open invitation to record at Black Wing studio. He turned up over a year later, saying the planets were “suitably aligned”, and laid down his masterpiece. As Lewis recalls in the RTE documentary, “I can remember looking around the control room and basically everyone was in tears, it was really, really moving”.

Producer and writer Paul McDermott spoke to Lewis for the project, along with an exhaustive cast of musicians, writers, collaborators and critics. Most poignantly, Michael’s sister Rita agreed to contribute, sharing early memories of “a happy little fella with a head of curls”, as well as tales of Michael’s joyous letters and photos posted home from his travels. At one point she recalls a memory of seeing him play outside the Bank of Ireland in Dublin and walking on without saying hello. She’d felt embarrassed because “it was like begging” — conservative Ireland hadn’t yet embraced buskers and avant-garde street artists, even though she admits the crowd was “spellbound”.

The documentary is titled No Journeys End, which is also the title of the album’s majestic 15-minute opening track, a manifesto for how Michael lived his life through travelling, and his shapeshifting, improvisations that seemed to channel centuries of world music while embracing left-field electronics. Larry Burns also points out that as a wanderer, O’Shea “understood the code of the road… he invested in people”.

Throughout the documentary, many are stumped when trying to describe Michael’s music. He was described in one early review as “a one-man Durutti Column”, and Jeremy Barnes of A Hawk and a Hacksaw says it’s “something primal”, while author and journalist Mark Prendergast says his music evokes the minute detail in beautifully ornate designs in mosques. Former Virgin Prune Gavin Friday seems semi-satisfied with his take: “A sci-fi trad player who looked like The Man Who Fell To Earth busking.” While McDermott doesn’t promise a definition of O’Shea’s sound, with this documentary — and an impeccably detailed Oral History on Medium as a companion piece — he has captured the essence of one of Irish underground music’s most cherished artists. And while Michael O’Shea was something of an enigma, McDermott’s project is the closest thing the world has to the definitive story.

Here he offers a few extra insights into the documentary, from the initial inspiration to the process, and his reflections upon finishing the project…

Can you remember your first time hearing Michael’s music, and what were your first impressions?
It was Sean O’Hagan and Cathal Coughlan who first told me about Michael O’Shea when I interviewed them for my Microdisney documentary, Iron Fist in Velvet Glove. We were chatting about the time a two-piece Microdisney started playing gigs in Cork and Dublin. They mentioned lots of different artists from the period that they played with and both mentioned Michael O’Shea. I hadn’t heard of Michael but Sean told me enough to want to investigate further. When I heard Michael’s music I was blown away. I couldn’t believe what I was hearing. It was hypnotic, repetitive and I was truly transfixed. It was otherworldly — there were sounds of the Middle East and South Asia but also his music was redolent of Irish traditional music.

When did you decide to make the documentary and how long did the whole project take?
As soon as I heard Michael’s music I started planning and researching the documentary. Documentary production is a real labour of love for me. I’m really passionate about the projects I take on and I’m fairly obsessive in my research and attention to detail. I speak to a lot of people and gather lots of stories that sometimes don’t necessarily fit my main narrative thread.

I put this extra information into long form Oral Histories to accompany the radio documentaries. The Oral Histories contain extra contributors, background information, history and further detail on the era and subjects. I think of them as DVD extras to the Main Feature, the kind of thing that I myself as a music fan want to read.

This project took over two years to pull together. Lyric FM were very supportive and came on board early on and once the Broadcasting Authority of Ireland backed the project it made the whole thing viable. WMO (Wire Mail order) had reissued Michael’s music in 2001 and Stano gave me a copy of this CD. The CD has biographical details about Michael and interviews with his family. It also contained the following line: “WMO is indebted to John Byrne without whose individual help.”

I couldn’t believe it — here I was searching for any morsel of information about Michael and it turned out a friend from Cork had been involved with the reissue of O’Shea’s music back in 2001. John told me that he was working on a reissue of Michael’s album with AllCity’s Allchival label, he helped me with my research and also put me in touch with Michael’s sister. Luck and serendipity played a part.

Michael’s music has been discussed and praised in underground music circles for decades, but how important was it to involve his family in the documentary?
It was really important to involve Michael’s family. On the surface the story may seem to be about a musician who invented an unusual instrument and created wonderful music but really it’s a story about an outsider, a black sheep.

Initially Rita, Michael’s sister, didn’t want to contribute. I understood why. Michael suffered a very tragic end and it was emotional for her to go back there and open up about it. I’m really glad that she eventually felt comfortable to share her family’s story.

The Mo Chara has an almost mythical, magical air, is it nice to know two versions are still with Michael’s family?
There were various iterations of the instrument and both Michael’s brother and sister have a version of Mo Chara. There are plans afoot to bring one of them back to Dublin and have a performance or something similar.

What do you think will be Michael’s enduring legacy in Irish and world music?
I think it’s really important that we document these stories. Michael came from Carlingford and invented an instrument based on a hammered dulcimer. 90 minutes up the road from him in The Glens of Antrim there is a long and rich tradition of dulcimer playing, probably best exemplified in the music of John Rea. Did Michael know this? Had he ever heard the dulcimer before his travels? Had he ever heard of Rea? We don’t know the answers to these questions.

But Michael did something really distinctive — he took an acoustic instrument and by hooking it up to various effects and amplifying it, he created a sound that is totally unique. I’m not sure about legacy but what I do know is that anyone who has heard his music has been transfixed by it.

In the documentary Michael’s old friend Larry Burns sums it up perfectly. When chatting to him about the experience of hearing the Mo Chara he moved closer to me and whispered, “you probably got it when you first heard him, you were gobsmacked.” 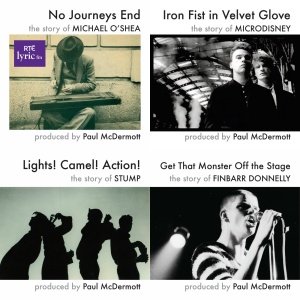