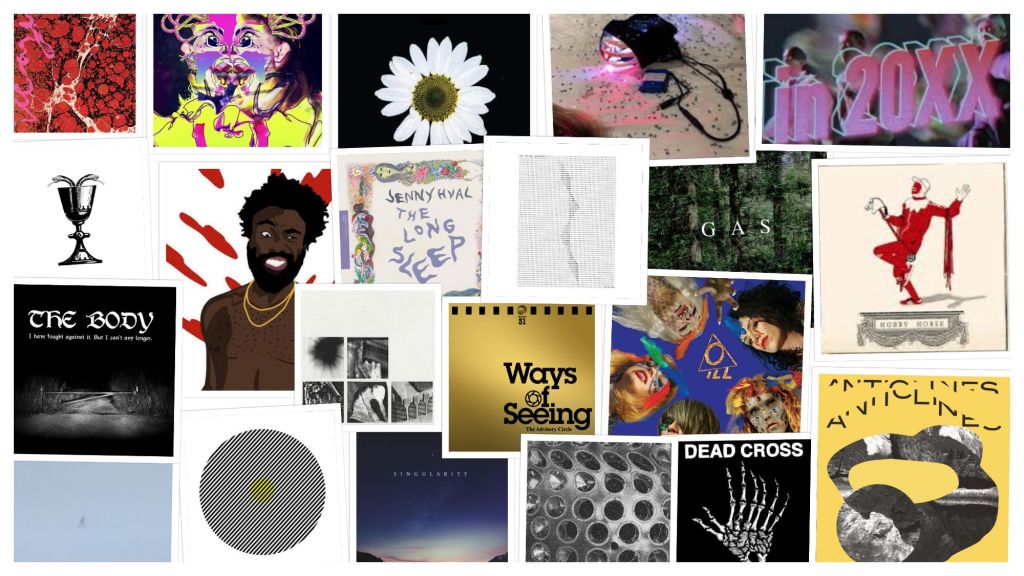 Childish Gambino’s gunshots rang out through the whole of this month, with This Is America becoming the pop culture mission statement of the year right away. But even if Donald Glover will be the last one standing here when 2018 in music is recalled in a few decades, some records this month may be up there in the end of year lists.

1. Childish Gambino – This Is America

This Is America was an instantly iconic track before most of us woke up and turned on the internet that day. You don’t need any more hot takes, 2 cents’ worth or memes at this stage, but it’ll go down as the song of the month, year and an era-defining statement. But even if you could strip the discourse and the video away, it’d still be a low-rumble gut-punch hip-hop belter.

Streaky was the first track from Death Grips’ upcoming album Year of the Snitch – and one of their most conventional songs in ages, with an actual hip-hop structure. There’s even scratching. It’s got a slithery 8-bit synth line, a Witness (1 Hope) kinda bassline and MC Ride’s non-sequiturs in all the right spots: “Booty on the outside… YUH!” Full post here.

Elizabeth Bernholz’s 2017 album Kingdom Come used cavernous space and discord to get under your skin, but Hobby Horse evokes the claustrophobia of her 2014 masterpiece LP Unflesh. Over drilled synths and whipped percussion she shout-whispers “Get on your hobby horse and get out of here”, along with other panic station paranoid retches. Full post here.

Aja’s self-titled debut album for Opal Tapes is a compelling rupture of noise, power electronics and spatial disorientation. It ultimately ends in catharsis, but Sweat Pearls is touch and go.
It has her disembodied voice buried under an assembly line industrial din and an off-time kickdrum that sounds like she’s trying to escape, banging on a 10ft metal door that’s never gonna budge.

The title track of Hval’s latest EP follows two jazzy, psychedelic pop songs, Spells and The Dreamer Is Everyone In Her Dream. The Long Sleep, though, is an 11-minute abstract drone, punctuated by the odd sax skronk, woodblock tics and the guiding voice of Hval as an unnerving meditation teacher. EP review here.

Everyone should listen to this track at least once, at least to find out about the mythical beast El Boraro, which hugs people to death, sucks their insides out and inflates their skin bag like a balloon.
The first track on Anticlines has the experimental Colombian artist taking on the guise of the humanoid creature, with her deadpan spoken word warning over tense minimalism that evokes Mica Levi’s Under the Skin score.

9. Jan Jelinek – Slavoj Zizek, What Signs Were There of the Imminent Dissolution of Yugoslavia? (Zwischen LP)

Jan Jelinek takes interviews of contemporary and historical figures, isolates one question then subtracts the actual words of their answer, leaving the umms and aahs, nervous laughs, tics and general icky mouth sounds, over abstract ambient electronica. It’s odd and absurdist, yeah, but strangely hypnotic, and he gets some good guttural blips out of Slavoj.
The album also features non-interviews with Lady Gaga, Joseph Beuys, Yoko Ono, Karlheinz Stockhausen and John Cage, among others.

On Lageos, UK producer Actress takes his singular electronic vision to the LCO without either side being diluted. Following a 2017 EP and a recent live show at the Barbican, this is one of the most intricate and beautifully-rendered albums of the year, with Chaos Rain a heavily-reverbed piano-led interlude.

11. The Advisory Circle – Be Seeing You! (Ways of Seeing LP)

The new album from Ghost Box MVP The Advisory Circle once again opens with a familiar Logotone ident, before we’re back on familiar immersive hauntological ground with this sublime retrofuturist balm, with a synth melody Kraftwerk would happily go with.

Just as instrumental versions of rap albums reveal hidden depths, there could be a classic ambient LP here underneath Skee Mask’s complex beat patterns. The Munich producer’s dusky pads and twinkling melodies are almost as compelling as the fractured techno, breaks and drum & bass on his second album.
Muk FM is a slight departure from the rest of the album, a sparkling acid track with hints of classic Warp or Rephlex.

Jon Hopkins’ first album in five years is a project explicitly informed by a journey of meditation and psychedelic exploration, and works as a holistic piece. But Luminous Beings encapsulates most elements of the album in 10 blissful minutes – woozy, melancholy ambience, reassuring 4/4 pulses, and a final third that feels like a sunrise.

Sheffield electronic veterans The Black Dog released two albums on May 25 – the paranoid, politically-charged techno of Post-Truth, offset by the ambience of Black Daisy Wheel. The latter follows their January piece Shards Ov Light, their most overtly serene work yet.
And while Black Daisy Wheel isn’t shot through with as much dread as their other ambient works such as Music For Real Airports, there’s still enough to keep you fidgeting. The opening track, however, feels like a church organ absolution.

After waiting 17 years to follow up his 2000 ambient techno masterpiece Pop, Wolfgang Voigt adds to 2017’s Narkopop with this LP that suggests all isn’t rosy in the Konigsfort woodlands.
While Pop’s landscape was impossibly lush and serene, Narkopop introduced a slight unease. But halfway through the Rausch LP a rupture of sorts occurs, with dark Hecker-esque drones, and a sense that things won’t be the same again.

The 14th release on Tuuun’s experimental electronic label FLUF is one of his own – and it borders on ‘catchy’ compared with the more recent sonic explorations from the likes of NYZ, Pantea and Agnes Pe.
It’s all relative though – 00114AA won’t be dropped at any bro-vest festivals this summer, but it’s got a repetitive shape-shifting spoken-word “acid” refrain and a regular 4/4 pulse. The sharp insectoid squirts will get you in the end.
Tuuun plays underground Irish electronic festival Open Ear this weekend.

Space Dick has been around for a few years as an Ill live anthem, but it’s also one of the standouts on the “genre-evading” Manchester band’s brilliantly chaotic debut album. With a manifesto of “disobedient noise”, these five are fucking the patriarchy from all sides.
Space Dick takes issue with the mansplaining around science fiction, and manages to rhyme NASA with “sexually harass ya” in the first line. It sounds like Papa’s Got a Brand New Pigbag through a Fall/Pop Group mincer, with frantic xylophone and cowbell adding to the giddiness.

I saw Danish punks Iceage at Eurosonic in January, noting that they’d lost the speed freak adrenaline rush of their early records, with the addition of a fiddle and horns. They hadn’t lost none of their menace though – channelling the Birthday Party or a skagged-out Roxy Music.
Pain Killer is the catchiest song on their new album Beyondless and not only because it features Sky Ferreira. It’s a raucous Bad Seeds-style rocker – the kind Nick Cave and co dropped around the time of Dig, Lazaurus, Digg!!!.

While the last two NIN EPs were familiar industrial comfort blankets of sorts – especially the catchy pop of Less Than – God Breaks Down the Door is a tantalising left turn as a lead single for the album Bad Witch, due next month.
Trent Reznor plays actual saxophone on it, channelling Bowie’s dirgey Subterraneans, with a Blackstar-type breakbeat as a bonus. Add squiggly acid from the early 90s AFX playbook, with Trent crooning, and you’ve got an odd pile-up that hangs together perfectly, even if it shouldn’t. Bring on that album.

Dead Cross follow their self-titled debut album with a new EP – also confusingly self-titled. The ‘supergroup’ of Mike Patton, Dave Lombardo, Justin Pearson of the Locust and Michael Crain of Retox revel in their “pencil-in-your-eye” hardcore punk, and this is another riot of speed-freak wrongness. The video is pretty NSFW too, with faces ripped off amid other gory details. Full post here.

21. The Body – Partly Alive (I Have Fought Against It, But I Can’t Any Longer LP)